Police: How dismissed soldiers use army uniforms for robbery 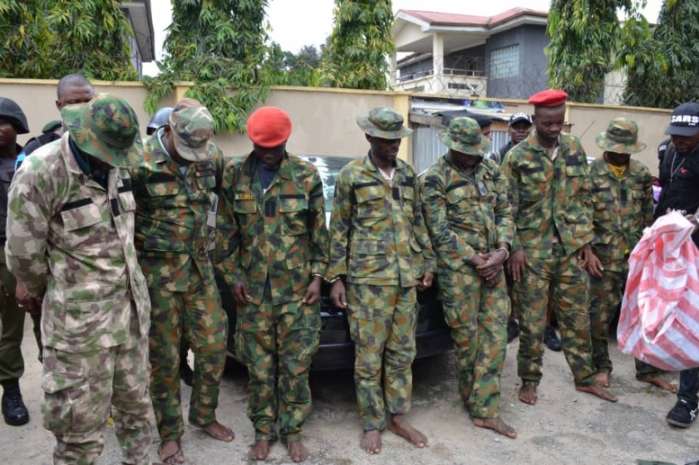 The Lagos State Police Command has arrested seven dismissed soldiers for allegedly using military uniforms and accoutrements during robbery in the state.

The dismissed servicemen according to the police, would hijack their victims at gun point under the guise of being a member of “OPS MESSA.”

It was gathered that the suspects would order their victims to drive to a lonely area where they would order the victims out of the car at gunpoint, robbed them and zoom off with their cars.

The gang members who were paraded Monday, by the Lagos State Commissioner of Police, Zubairu Muazu, at the Police Officer’s Mess, GRA, Ikeja, admitted, belonging to a gang of robbers terrorising residents of the state.

In his confessional statement, Oluchukwu, said that he was dismissed from the Nigerian Army, in 2013 while serving in the North East.

“I was dismissed because I took permission from my unit commander to go back home to treat myself. I stayed beyond the one week period I was permitted to stay. When I was dismissed, I went back home, stayed for a while before hooking up with other of my colleagues who were also dismissed in Lagos.

“I started a new life by escorting commercial vehicles. I was making N3,500 each day. I met other members of the gang while escorting vehicles. We came together to form a new gang. We were later arrested.”

Lagos State Commissioner of Police, Zubairu Muazu, while parading the suspects said that the command received a lot of distress calls from residents of Ijegun and its environ about the activities of some armed robbers who operated in military uniforms.

Muazu said that one of such incidents happened on February 18 at about 4.30 pm, where a commuter who was travelling to Ibadan from Ijegun was accosted by the said armed robbers in military uniforms dispossessed him of his Lexus Sports Utility Vehicle, RX330 Black in colour at gunpoint.

He said that it was on the strength of the complaints that the command charged the Special Anti Robbery Squad (SARS) to identify the gang and apprehend them.

“The suspects confessed to being responsible for a series of robberies within Ijegun and its environs. The suspects will be charged to court at the end of investigation,” he added.