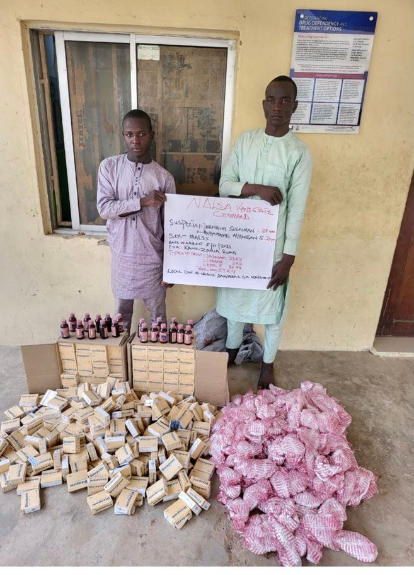 NDLEA’s spokesperson Femi Babafemi said this in a statement on Sunday.

Bababfemi said that operatives of the agency seized the consignments which were en route London, Saudi Arabia, United Arab Emirate and New Zealand, through two major courier firms in Lagos.

He stated that some of the consignments were concealed in containers of body cream, tea bags, vehicle oil and air filters.

According to him, the suspects were arrested with 23kgs of diazepam tablets; 2kgs of codeine syrup and 32kgs of Exol 5 tablets, bringing the total weight to 57kgs.

“Earlier on Wednesday, Nov. 3, operatives of the Kano Command of the agency had arrested one Mizambilu Tijjani, with 64 kilograms of cannabis sativa.

“The operatives also arrested one victor Nsodikwa with 34 cartons of Pentazocine injection and one carton of Diazepam injection in Sabongari area of the city, ” he said.

Babafemi said that the operatives also seized a consignment containing 28.251kgs of Exol-5; 6.6kgs of Barcadin Codeine Syrup; over 38.532kgs of Tramadol, bringing the total drugs seized to 73.808kgs in Kogi.

He added that NDLEA’s operatives in Osun State command seized 130.518kgs of cannabis and 18grams of cocaine in Modakeke area of Ile-Ife.

Babafemi quoted the Chairman, NDLEA, retired, Brig.-Gen. Buba Marwa, as commending the officers and men of the agency and their counterparts in Kano, Kogi and Osun states for their good deeds.

“Marwa commended them for sustaining the heat on the cartels across the country.

“He urged them and their compatriots in other commands to intensify the offensive action against all merchants of death in Nigeria,” he said.