Alh Kabiru Dambazau (Sarkin yakin S/Bai) A LIFE WELL SPENT: A TRIBUTE TO A FATHER OF ALL 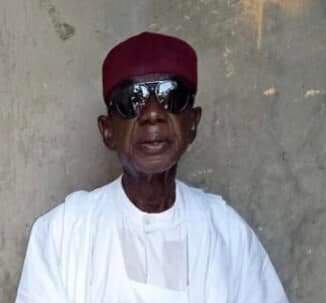 For the past 40 days I found it difficult to write about the man that I grown up before his eyes, because I was emotionally unstable to do so, but today at the 40 days firdau of Abba I summoned the courage to put in one or more words about the man that is a FATHER OF ALL.

When I saw the call of my younger brother around 5:40 am of Wednesday 27th October, 2021, I just knew that all may not be well, his words on the other side of the phone confirmed just that. He said “is like Abba is not breathing but we have sent for the Doctor”, I just simply told him I am coming and so I drove to the hospital, but even before I reached to the hospital he called and told me what the Doctor confirmed to them, that Abba has indeed stopped breathing, meaning he was no more.

It was indeed a very dark Wednesday for me and the rest of the family, in fact, 27 October is added to the other two darkest days of my life.

With tears filling my eyes I start writing this Tribute to the father of all. According to his records, Abba was born in 1945, that is 76 years ago (78.5) as the case may be. He schooled and started his career as a Teacher. He taught in primary, secondary schools and rose to the position of Registrar Kano State Polytechnic (which was then Institute of Higher education, Kano State) from where he transferred his services from State to the Federal government. He was given the position of deputy director Administration in the then newly constituted National Population Commission during the President Ibrahim Babangida regime which was then headed by Alh Shehu Aliyu Makama, the late Makaman Nupe, (may their souls rest in peace). He rose to became the Director Admin n Services, a position he held to his retirement. He retired from active services during the 1st tenure of President Obasanjo and was given the Special Advisor to the Chairman of National Economic Intelligence Committee (NEIC) until the end of Obasanjo’s tenure. After which he retired home.

What happened during his reign of active service, I will leave that to his students and staff that were directly affected.

Abba was a humble, caring and very intelligent father, his sense of humility can be felt even to the friends and people around his children. This can be attested by our friends. His simplicity as a father knows no bounds. He is a man of immense patience, wisdom and understanding of situations. He was an Administrator per excellence. Abba was just what you can describe as an EMBODIMENT OF KNOWLEDGE

The wide gap created by his death to even the wider Dambazawa family cannot easily be filled up in a near future. As for us the immediate family, a bigger part of us is permanently cut off, and there will be no replacement to fit in. But we take solace that the Almighty Allah that took him in His own wisdom, has reason that cannot be questioned. Ab initio as Muslims, we all knew that “every soul shall taste the bitterness of death” and with the continuous saying from the Qur’an of “innalillahi wa inna ilaihirraji’un” Allah will comfort us and heal all our worries and emotional wounds in a way that our scares n fears will just banish. Allahu Akbar. For Abba, it is indeed A LIFE WELL SPENT.

Today it is exactly 40 days of the demise of Abba, but it is just like yesterday that I left him on his hospital bed after a successful surgery, happily that all will be well, not knowing that I was bidding him the last goodbye. Allahu Akbar.
Ya Allah commit the soul of Abba and all the deceased Muslims to Jannatul Firdausi 🤲
Ya Allah give us the fortitude to bear this irreparable and irreplaceable lost🤲
Ya Allah accept us when You are most happy with us🤲, ya arRahamarRahimin, ya rabbil alamin 🤲.

Allahu Akbar, Allah in His infinite wisdom has also taken the soul of the lead Doctor that performed the operation on Abba, Dr Nasir Isma’il, a very kind, nice and exceptionally intelligent person I have came across. May jannatul firdausi be your final home abode Doctor Nasir🤲