Aliko Dangote: I hope to give out large wealth like Bill Gates 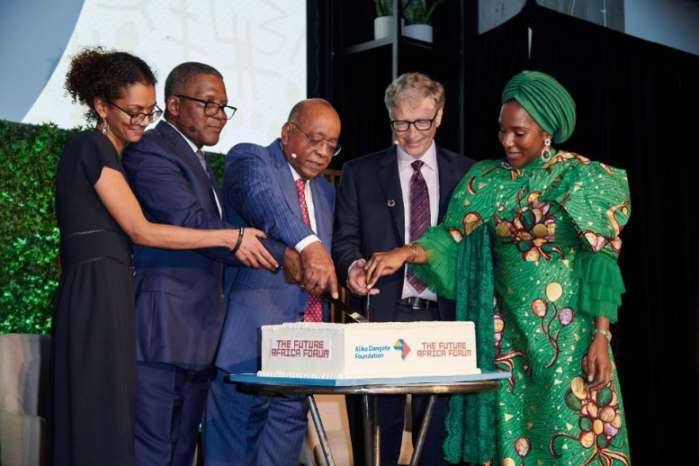 Business tycoon, Alhaji Aliko Dangote, says he hopes to give out a chunk of his $9.2bn wealth like billionaire philanthropist, Bill Gates.

Dangote, who is Africa’s richest man, said this at the 2019 Goalkeepers’ event hosted by the Bill and Melinda Gates Foundation in New York on Wednesday.

Dangote, who was a discussant alongside Gates, said he had been running the Dangote for over 25 years but he remained impressed by Gates’ philanthropy.

He said he found it amusing that a man who is from America could show so much love to Nigeria and invest in the lives of people he had no relation to.

The industrialist said, “When I started my foundation in 1994, I never realised we had this massive challenge in the health sector.

“Really, it was mind-boggling when we had this agreement to collaborate with the Bill and Melinda Gates Foundation and that really opened my eyes to realise that there are a lot of challenges in health.

“At that time I didnt have the opportunity of meeting Biill but meeting Bill changed me into a different person. This is somebody that has nothing to do with us in Africa or Nigeria but he is putting his money and his soul into everything.

“He is very committed to helping humanity and that really surprises me a lot and I realised that he is a simple person and I never knew Bill would be this simple. He is a very soft-spoken guy and kind hearted.

“It is very difficult to find people like Bill in this world. Bill, we are very grateful and I can assure you that with my association with Bill, my only prayer is that in the next few years, I will try and give my chunk of wealth to charity.”

In his response, Gates thanked Dangote for connecting him with the governors in the North.

The American billionaire noted that he was not a sociable person as he preferred to communicate with people via email.

He, however, said it was Dangote who proved to him that one could make better impact by reaching out to powerful politicians who are in charge of policy.

The philanthropist said without Dangote, he would not have been able to chat with the likes of Sokoto Governor, Aminu Tambuwal, and five other northern governors.

Gates said, “Aliko knows people; he has relationships and he is willing to reach out to people.

“He says ‘let’s reach out to the governor , let’s talk to him about this’ and the next thing you know, we’ve got the governor on the phone, talking.

“So, this ability to reach out and draw on the broad relationships that Aliko has developed…you know I am pretty shy about calling people. I just want to mail them my charts.

“So what has come out now is that Aliko and I do conference calls with six of the governors from the northern states where we look at vaccine coverage.

“It is a big challenge but I’ve drawn from Aliko’s communication skills and he is not afraid to call anyone. Everyone likes to.talk him.”

Earlier, Gates noted that a place where a person is born could determine how long the person could live.

The billionaire noted that living in the Americas and Europe translated to a longer life span while those born in some parts of Africa and Asia are not as fortunate.

Gates said some states in India and Nigeria had already met the Sustainable Development Goals but lamented that the statistics were the direct opposite in some states within the same country.

The billionaire said the new task was to close the gap by ensuring that all had access to quality health and education by re-examining equality.

The Goalkeepers’ event also seeks to honour persons who have played a vital role in helping to achieve the Sustainable Development Goals in their communities.