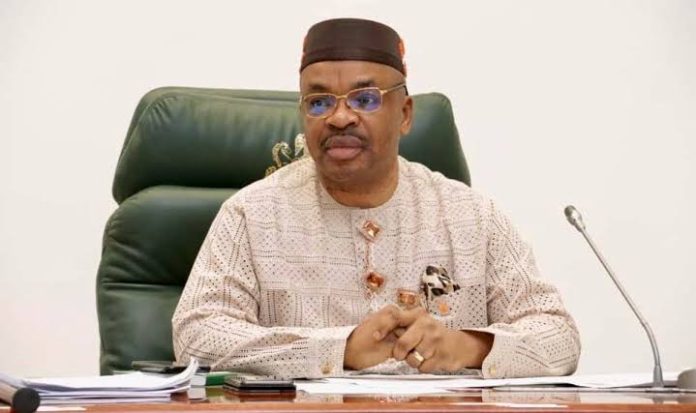 As a northerner, I always feel proud to associate myself with credible persons opportune by destiny to lead their people in politics and governance who developed love and care for their constituents. These category of patriotic Nigerians are the proverbial rare species and have become a role model for emulation by their generation irrespective of party affiliations, cultural or geographical locations.

The personality that readily comes to my mind in this context is no other person than His Excellency, Governor Udom Emmanuel of Akwa Ibom State. This promising Nigerian always make my mind tick whenever he speaks on topical and burning issues affecting the polity.

Though I was not holding brief for His Excellency, however I hasten to add that Udom Emmanuel has become a household name not only in South-South Geo Political zone but Nigeria at large, due to his antecedent as progressive, focused, principled and result oriented leader per excellence in governance and politics.

His determination and expressed love for his people, the good people of Akwa Ibom knows no bound. I recall with nostalgia, his inaugural address after taking oath of Office of his determination to turn Uyo into a mega city and a sanctuary of the Nation. As a patriot and true to his words, Governor Udom Emmanuel deliver on his promises and transform the hitherto quite City into a business and commercial hub of the region. Uyo, the State capital is now wearing critical infrastructures beyond the imagination of even his arch-rivals on all spheres of human endeavors.

It took a Governor that have Heart of love for his people to invest on socio-economic aspects of development that put the people first. This scenario has transform the general well-being and socio-economic emancipation of his people in attaining greatness in life. indeed, His Excellency, Governor Udom Emmanuel is not a only a pace setter but an achiever.

Udom Emmanuel’s investment on Education made the State an envy for all with the recruitment of more than 5,000 Primary and Secondary School Teachers to uplift education of all Akwa Ibomlites from the grassroots, in his effort to lay sound foundation and qualitative education.

This feat was re-echoed at the State Tertiary Education level where the State invested billions of tax payers’ money and support Students of the State to attain excellence in Tertiary and University levels in and outside the Country. Hundreds were given full scholarship and sponsored abroad and are studying various disciplines at Universities across Europe, Asia, USA and the Middle East.

Therefore, it perplexes me and other well-meaning Nigerians, to the recent outburst of Garba Shehu, the Presidential Aide on Media that pointed accusing fingers to States of the South-South of doing little to their people in respect of allocation they are enjoying from the Federation purse.

One cannot take it for granted especially, with the super and mega structures being put in place in Akwa Ibom State by the Udom Emmanuel Administration. My guess is what indices or parameters Garba Shehu used to carpet these lasting legacies put in place by the Governor. We are not joining issue with the Presidential Media Aide, but will not allow his rantings to damage the goodwill, reputation and confidence Nigerian had on His Excellency, Udom Emmanuel the Executive Governor of Akwa Ibom State.

Nigerians believes Garba Shehu and his principal have failed the nation woefully. APC has nothing to offer to Nigerians, as such, they are resorting to name calling and blame games for their monumental failures. Therefore, it is not new for Garba Shehu to unnecessary fabricates half-truth statements against progressive elements like Governor Udom Emmanuel and swept his tremendous success stories under the carpet.

It is not by coincidence that as at the time of writing this piece, His Excellency, Governor Udom Emmanuel has constructed over One Hundred and Thirteen roads projects linking all Local Governments to the State Capital, Uyo running into Billions of Naira.

The Governor did not stop at that, he went on construction revolution in the State by embarking on the ambitious multi-billion Naira Ekpene Ukpa cable-stayed bridge project, designed to decongest Uyo and ease traffic situation for socio-economic well-being of Akwa Ibom people. This super structure is the first of its kind in the State and is being financed by the Udom Emmanuel administration.

The Governor also initiated the ambitious IBB Flood Control Projects in the State to mitigate against floods and its associated problems in the state and the entire Local Governments.

These are the proverbial tip on the ice berg in the transformation agenda being faithfully executed by the Governor since his assumption to Office. He left no stone unturned in his quest to change the fortune of the State for the better.

The massive investments made by the Udom Emmanuel’s PDP administration in Housing development and Environment are monumental. The State Government accorded same feat to the provision of portable water supply network, refuse evacuation and management, women and youth development and a host of other people oriented programs aimed at answering the yearnings and aspirations as well as delivering real dividends to the Akwa Ibom citizens.

Akwa Ibom has indeed become the reference point in physical development progress in the Country. Its legacy projects are sprouting everywhere in the State. Schools, Hospitals, Roads, Clinics, Dispensaries, Re-creational facilities, Theatres, ICT Centers, super and mega structures for eyes to see, hands to feel and posterity to judge.

There are ample justifications on the spending made on projects, government policies and programs, healthcare delivery system, environment and general administration in Akwa Ibom State by the administration of His Excellency, Governor Udom Emmanuel. Space here will not allow for listing of all these lasting projects executed under the watchful eyes and supervision of the State Governor.

Therefore, it is sad and unfortunate the statement from the Media Aide of the President indicating that nothing was done to the good people of the State with Derivation funds, using unverified Newspaper sources as the yardstick to measure his rantings.

One may ask, where are the Garba Shehus and is paymasters when His Excellency Governor Udom Emmanuel is extending and impacting on his constituents, lasting legacies for their socio-economic progress and development? They are nowhere to be found, honestly.

Akwa Ibom indigenes have spoken and that is why they gave another mandate by re-electing him for the second term with convincing votes ahead of hi political rivals.

To God Be the Glory!