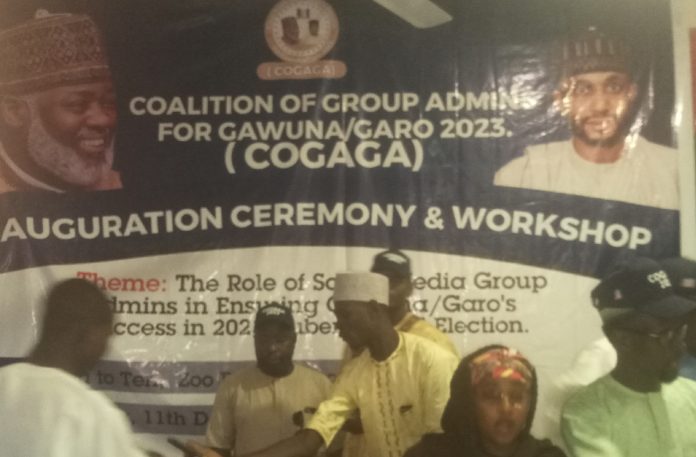 In a colourful event which took place on Sunday 11th December 2022 at Ten to Ten Restaurant, Zoo Road, Kano. The convener of the event in person of Shehu Mustapha Chaji, started by appreciating the members for sparing their time to come for the event, this is a clear indication of full commitment to the journey. He continued by explaining that this Coalition of Admins cut across all social media platforms with like minds of interest in promoting democracy, good governance and development of Kano state.

He added that, “after months of accessing all candidates we finally agreed and choose Dr. Nasiru Yusuf Gawuna as the best and should come together to support, promote and work for him and his deputy to attain victory next year InshaAllah.”

The main reason for our support for Gawuna centered around his vast experience in governance and administration. Gawuna worked with Sardaunan Kano Senator Malam Ibrahim Shekarau when he was the governor of Kano state. Eaqually Gawuna also worked with Madugun Kwankwasiyya Senator Rabiu Musa Kwankwaso as Commissioner for Agriculture. And today he’s working with His Excellency Khadimul Islam Dr. Abdullahi Umar Ganduje as the Deputy Governor of Kano State.

He conclude that Gawuna is humble, gentle, easygoing and listening person. He’s the type of personality Kano needs from next year to lead the state to path of progress, growth and development.

In his address the Chairman of the ocassion who is eqully the Chairman Ungogo LGA Engr. Garba Ramat was delighted with the coalation’s decisions to support Gawuna Garo in the next election. He added that there is huge work ahead, which makes it necessary to stategise and come-up with new techniques such as usingbthe #tags to differentiate their postings for the war.

He urged that members should always attack first not to be left as a respondent, he also calls on member to look for genueine information, verified before posting them.

Barrister Sunusi Musa SAN who represents the Director General of Gawuna Garo Campaign Organisation Engr. Rabiu Sulaiman Bichi also express his happiness for being invited to the event, he added that the DG was unavoidably absent as a result of a heavy trafric on his way retuining from Bichi, but he urged that his mind and soul are with members of the event.

Sunusi Musa assured the coalation that they will not regret their decision to support Gawuna Garo as they are best and the only solution to Kano’s problem. He urged that this time they are fully prepared for the battle and there would be nothing like inconclusive because they learnt their lessons from what happen in 2019 election.

He finally prays for safe journey back to all the members to their homes.