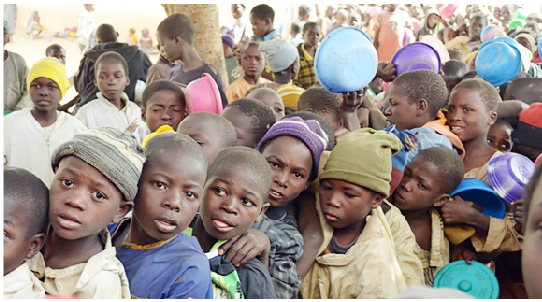 UNESCO, which says a new and improved methodology was used to arrive at the latest figures, said there are “244 million children and youth between the ages of 6 and 18 worldwide (who) are still out of school.”

According to the statistics, India, Nigeria and Pakistan have the highest figures for out-of-school children globally.

The figures in Nigeria have oscillated between 10.5 million and around 15 million for more than a decade, with the situation growing worse due to the degenerating security situation in the country.

UNESCO announced the figures in a statement issued on Thursday, a copy of which was made available to NE.

The global organisation said the team developing the report “has the official mandate of monitoring progress in meeting the Sustainable Development Goal on education, SDG 4.”

The statement read in part: “The new estimates, published online by the UNESCO Institute for Statistics (UIS) and the Global Education Monitoring (GEM) Report, show that sub-Saharan Africa remains the region with the most children and youth out of school with 98 million children and young people excluded from education. It is also the only region where this number is increasing; out-of-school rates are falling more slowly than the rate at which the school-age population is growing.

“The region with the second highest out-of-school population is Central and Southern Asia with 85 million. The top three countries with the most children and youth excluded from education are India, Nigeria and Pakistan.”

According to the Director of the UNESCO Institute for Statistics, Silvia Montoya, efficient use of the available data is important to address the gaps towards achieving the fourth goal of the SDGs.

“UNESCO has long underscored the need to make more efficient use of the data we have. That’s why we’ve brought together administrative data with information from surveys and censuses. By using multiple data sources, gaps are filled, data trends are smoothed, and we can draw consistent time series,” the official said.

According to UNESCO, the new methodology combines multiple data sources, and it has been used in the past to estimate flagship health indicators, such as maternal and infant mortality rates.

It said this is the first time it has been used in education, “marking a significant improvement to the robustness of the estimates.”

Speaking on this, UNESCO’s Assistant-Director General for Education, Stefania Giannini, said; “Global out-of-school numbers are lower than we thought, but far too many children are still missing out. Countries have committed to benchmarks to slash out-of-school numbers by over half by 2030. We must identify solutions during the Transforming Education Summit called by the United Nations Secretary-General this September so that countries can deliver on these pledges. All children should have access to quality education.”

UNESCO said important data gaps have been filled in countries with large out-of-school numbers “but where no administrative data of good quality has been available for over a decade.” It listed the countries in this category to include Nigeria “which has an estimated 20 million children and youth out of school, Ethiopia (10.5 million), the Democratic Republic of Congo (5.9 million) and Kenya (1.8 million).”

“With UNESCO’s help, 90% of countries have now set national SDG 4 benchmarks for 2025 and 2030, including on out-of-school rates. We must step up our support for those who are being deprived of their opportunities, keeping a watchful eye on those who have struggled on their return after COVID-related school closures,” said Manos Antoninis, Director of the Global Education Monitoring Report.

The statement further noted that the estimation process incorporates the latest country data in 2021 to be released by the UIS on September 13. “A preliminary assessment suggests that while primary and lower secondary education enrolment has not been affected, there might be some impact on upper secondary enrolment. More information is needed in the coming year to assess the impact.”

The global body said the new estimates confirm that the difference in the rate of girls and boys out of school has been considerably reduced.