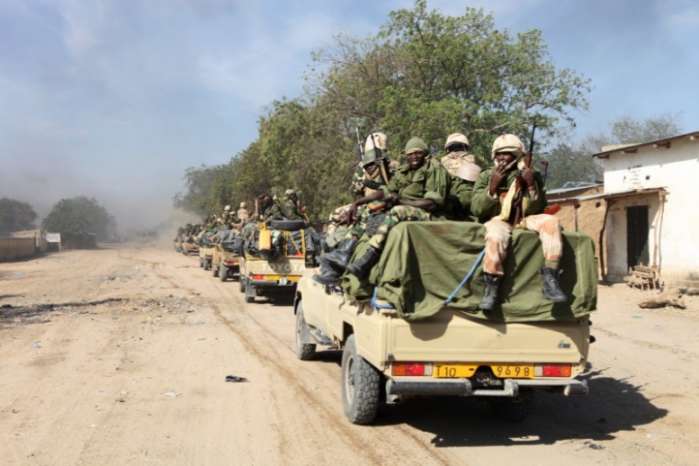 The recent decision by Chad to withdraw its troops assisting Nigerian Soldiers in the fight against Boko Haram under the aegis of the Multinational Joint Task Force (MJTF) may not be unconnected with the closure of borders by the Federal Government.

Although highly placed Military source claimed the Chadian troops were withdrawn because it has accomplished the task for which it was drafted.

But a reliable source within the military cycle, who doesn’t want his name mentioned, told our correspondent in an exclusive chat that the Chadian troops and those of other countries participating in the Joint Taskforce were supposed to be deployed along the borders of their respective countries and can only deploy troops in the country when requested to so do.

According to the source, the modus operandi is for the troops to patrol the borders and ensure that Boko Haram fighters do not escape into their countries.

He said that with the closure of the border, there was no need for the troops to continue to remain, “I think Chad pulled out their troops as a result of the closure of the Nigerian border because they cannot just remain without doing anything”.

However, the position was countered by another senior Military Officer who pleaded anonymity.

He insisted that the withdrawal of the Chadian troops has nothing to do with the closure of the border but was as a result of the fact that the Boko Haram insurgency has been decimated.

The Chadian authority said that it was withdrawing their troops in Nigeria because they have completed their mission.

Meanwhile, the Defence Headquarters has kept mute about the development. The Acting Director Defence Information, Brigadier General Onyema Nwachukwu, when contacted did not pick his calls or reply to the text sent to his phone.

But speaking briefly on the development, the Spokesperson of the Multinational Joint Taskforce, Colonel Timothy Antigha, said that Chad has not pulled out from the Joint Taskforce but has only withdrawn its troop deployed to Nigeria.

He said: “The issues should not be mixed up. Chad has not pulled out of the MJTF but has only withdrawn its troop deployed to Nigeria”.

Antigha also stated that the withdrawal of the Chadian troops has not affected the operations of the Taskforce in Northeast.