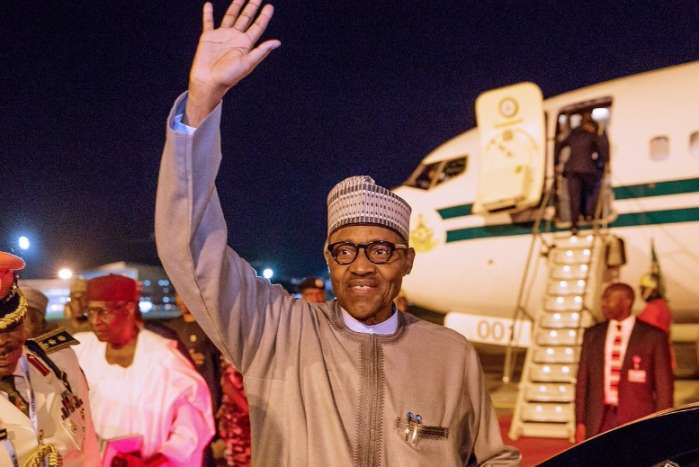 Buhari’s plane landed at the Presidential Wing of Nnamdi Azikiwe International Airport, Abuja around 12 midnight with some members of his entourage.

He was received at the airport by top government officials.

The President was accompanied to the conference by Governors Babagana Zulum, AbdulRaham AbdulRazaq and Babajide Sanwo-Olu of Borno, Kwara and Lagos States respectively; ministers and other top government officials.

Buhari, who attended TICAD6 in Nairobi, Kenya in August 2016, had participated at the Japan conference with the theme, “Africa and Yokohama, Sharing Passion for the Future,”, which was declared open by the Japanese Prime Minister and host, Shinzo Abe.

President @MBuhari has tonight, returned to Abuja after his participation in the 7th Tokyo International Conference on African Development (#TICAD7) in Yokohama, Japan for Abuja. #PMBinJapan72011:46 PM – Aug 31, 2019Twitter Ads info and privacy260 people are talking about this

He also attended a State Banquet and honoured the invitation of Emperor Naruhito to a Tea Reception at the Imperial Palace, Tokyo.

Buhari also attended some side-events and met chief executive officers of some Japanese companies with huge investments in Nigeria.

Formed in 1993, the now triennial TICAD, which has been convened alternately in Japan and Africa since TICAD6, is the largest international conference held in Japan which “provides an open forum that generates innovative discussion among various stakeholders on African development.”

TCAD7 had focused on Africa’s “economic transformation and improvements in business environment and institution through private investment and innovation; promotion of resilient and sustainable African society for human security; and peace and stability in support of Africa’s domestic proactive efforts.”