NITDA DISTRIBUTES 50 LAPTOPS TO WOMEN JOURNALIST FROM NORTH WEST ZONE A, TRAINS THEM ON DIGITAL JOURNALISM. 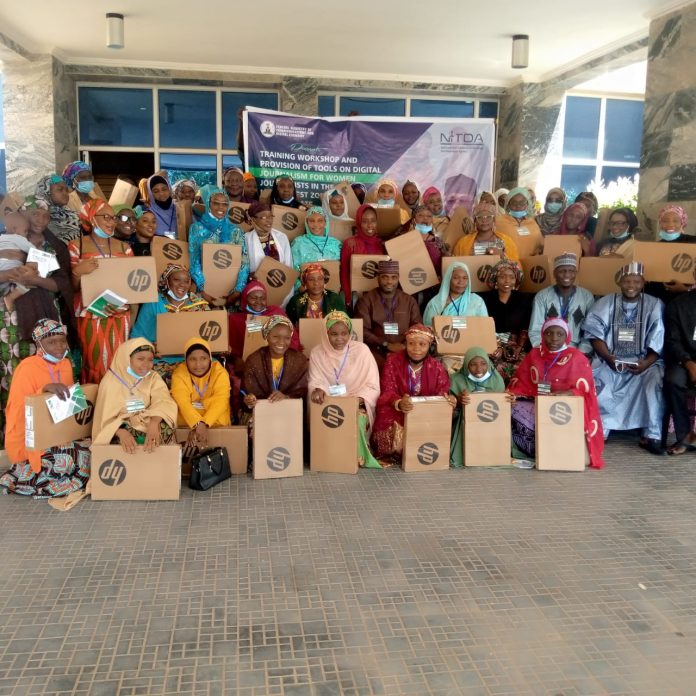 The National Information Technology Development Agency NITDA under the office of the Director General Mal Kashif Inuwa Abdullahi has trained 50 women journalists selected from the North Western part of Nigeria on digital Journalism and distributed 50 sets of computer laptops to the participants with the view to motivate them to embrace the trend of digital technology in their profession.

The two days workshop held in Jigawa state 3 Star hotel Dutse under the umbrella of NAWOJ jigawa chapter witnessed the presence of the Director General of National Information Technology Development Agency NITDA, who was ably represented by Bashir Ibrahim (MIEEE).

Declaring the workshop open, Mr Bashir stated that, the decision to select Jigawa is considering the serenity and passion it has for hosting information communications and technology (ICT) programmes aimed at empowering citizens with the right modern skills and knowledge to global digital trends.

The purpose of the training is to create awareness on the potentialities of ICT in journalism and transform the profession especially among women journalists, thereby Making it more effective and efficient for them to compete with other prominent global media gladiators.

Mr Bashir added that NITDA, being responsible for regulation and promotion of ICT practice in Nigeria, has taken interest to fully sponsor the program in order to equip the participants with skills and tools required to counter the hazard associated with cyber attacks through identifying types of online threats and deploying ways to mitigate them. He congratulated the participants and hoped that the skills acquired during the workshop will be optimally utilized and ensure that the participants will be good ambassadors to the agency, he then declared the workshop open.
In her opening remarks, the Chairperson of the Nigerian Association of Women Journalist jigawa state Chapter Hajiya Hauwa Ladan, appreciated the effort of Mal Kashif Inuwa Abdullahi stating that NITDA has empowered millions of aspiring young people through digital skills and that has created more jobs and has lifted people out of poverty.
The Chairperson added that in Jigawa alone, NITDA has trained 1500 students and teachers of English and Mathematics on ICT and more ICT buildings have been put in place. She said, i must commend the exemplary gestures of the Minister of Communication and digital economy Dr Isa Ali pantami and our digital transformation ceaser Mal Kashif Inuwa Abdullahi for imparting the teeming youth across Nigeria and Jigawa in Particular.

She explained that the emergence of digital journalism in the United Nation started with the production of teletext, which is a news and information service in the form of text and graphics, transmitted using the spare capacity of existing television channels to televisions with appropriate receivers.Digital journalism involves producing and distributing information through a channel or medium which is the internet under an online platform as opposed to publishing via print or broadcast channels.
Stating the commandments of digital journalism, Miss Fiddausi said a good digital journalism should have independence, truth, verified information, interesting, relevant,immediacy, and hypertextuality etc.
She enjoins the participants to ensure they follow the rules of digital journalism which includes writing in an inverted pyramid style i.e writing from the most important points to the least, ensure credible sources, and information should be free from error, and the news should have relevance among others rules.
In her closing remarks, Miss Fiddausi stressed the importance of digital Journalism as it’s faster and more efficient compared to conventional journalism, adding that it minimizes production cost and manpower among other relevance.