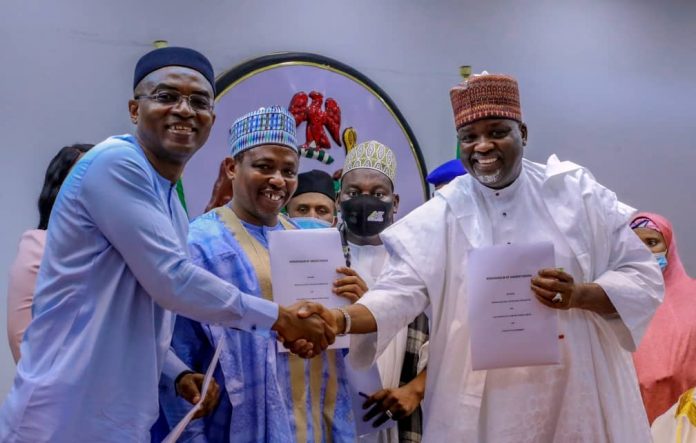 Speaking on friday after the signing of the MOU at Kano Government House, Governor Abdullahi Umar Ganduje represented by his Deputy Dr.Nasiru Yusuf Gawuna described the occasion as a major step forward towards revitalization of the economy particularly for the industries,with Kano being the commercial nerve centre of the Northern part of the country,he therefore urge investors to utilise the opportunity offered by the NNPC-AKK Gas Pipeline project when completed for their businesses.

He pointed out that as part of the commitment of his administration already approval has been given by the State Executive Council to the NNPC-AKK Pipeline project delivery and Gas Industrialisation Committee to set up its planning location at Tamburawa in Dawakin Kudu adjacent to Challawa Water Works.

According to the Governor…this project is very important to us,infact we have started seeing positive results through the commitment of the committee, I am calling on them to however sensitize other stakeholders about the impact of the project because Kano is a large market.

He also assured of continued support and cooperation to the NNPC towards the realisation of the project.

The Group Managing Director of NNPC, Mele Kyari represented by the Chief Operating Officer Gas and Power Engr Yusuf Usman explains that with the way the President Muhammad Buhari is so passionate towards to uplifting the living condition of the people the AKK-Gas pipeline infrastructure would enhance the economic development of the country.

He went on to say…knowing what Gas Pipeline did towards reviving the industries in Lagos and how today it is used to provide energy for gas based industries to produce fertiliser and lots more, we realised Kano being endowed with lots of potentials will be a major business partner having already taken a step through creation of industrial park which would boost and sustain development for the economy.

In his remarks the Managing Director of the Gas Aggregation Company Of Nigeria, Olalekan Ogunleye said the signing of the MOU is expression of confidence that Kano has been designated as a Gas hub in Nigeria.

Other stakeholders who witnessed the signing of the MOU include the Chairman Kano AKK Gas Pipeline project Committee Engr.Mu’azu Magaji.