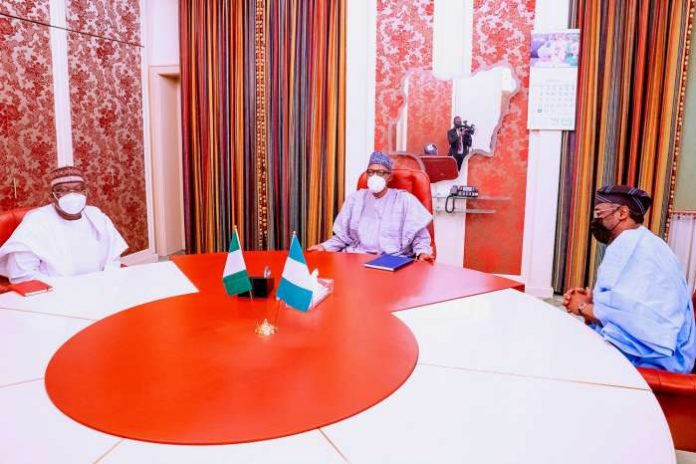 As the security situation continues to degenerates on daily basis, President Muhammadu Buhari is expected to submit a supplementary budget to the National Assembly for more funds to be made available for the procurement of equipment to battle the insurgents.

Already, the President yesterday met with the leadership of the National Assembly over security matters and also concerns on how to make funding available for COVID-19 vaccination.

Besides, the Federal Government is looking at the possibility of bringing home Nigerian scientists outside the country who have contributed in producing the COVID-19 Vaccines for many countries for them to also make their services available to their fatherland.

This is as newsmen has gathered that President Buhari will be meeting with the security heads on Tuesday at the Presidential Villa, Abuja.

Speaking to State House correspondents, President of the Senate, Dr. Ahmad Lawan said the meeting with the President on Monday was primarily centered on how to improve security situation in the country as well as how to make the COVID-19 vaccine available to Nigerians.

The Senate President said, “You know, it is one government where the legislature are working together and we have come to meet with Mr. President to discuss issues of serious national concern.

“And one of those issues is the issue of the supplementary budget. Both executive and legislative arms believe that we should have a supplementary budget to provide for funding of the COVID-19 vaccination in Nigeria, as well as the security, providing more resources and platforms to our security agencies.

“And I am sure that when we have more resources available to our security agencies, we will see an even faster recovery of our situation.

“As for the COVID, I believe that our country, Nigeria should have some resources for our scientists to collaborate with other scientists from across the globe, to also have our own vaccine because we can’t rely on what other countries are doing now, every nation to itself, that’s what is happening.

“And we have great scientists in this country. We have many Nigerians outside Nigeria, who are also helping to develop the vaccines in other countries. So why don’t you bring them home? Why don’t you put some resources so they will also produce ours locally here and take care of our population, and later other African countries especially our neighbours.

“So I believe that we had a very good discussion and interaction with Mr. President along those lines.”

Asked if the National Assembly will consider the request from a vaccine candidate asking for $100 million for trial, the Senate President said there would not be any provision for such request, saying that things don’t work that way.

He said, “No, we have to have something scientifically proven. There has to be the concrete system that you can channel resources into not an individual moving around talking. No, no, no, we should have everything in place.

“We have capable scientists, we should have that critical mass of scientists coming together to provide the environment that will guarantee and warrant deployment of public resources but just an individual saying he has a system or he has a vaccine candidate, no, I don’t think that’s the way to go.

“We should have proper and serious engagement because vaccines develop in Nigeria will need to be applied or may be subjected to international assessments. So it’s not going to be a vaccine for Nigeria alone. It’s supposed to be a vaccine for the entire world but of course, originated from Nigeria.

“So, we want a very solid and strong platform on which our scientists will have all the opportunities and then the government provides the necessary resources. But eventually, of course, those who will manufacture these things will be privacy concerns.”

Further asked the kind of intervention Nigerians would hope to see from National Assembly on the security challenges, he said that the intervention would be more on the approval of funds.

“Of course, approval of funds for the purchase of platforms, weapons, and equipment are essentials we have already approved so much. And that’s why we’re expecting Tucsons to be here. We’re expecting some APCs from Jordan.

“We’re expecting some APCs from China. And we believe that we’ve not had enough, we still need to approve more sources for the purchase of weapons for our armed forces, because this is the number one priority of government or any government really, to secure the people, and of course later the welfare.

“So we believe that we will be doing the right thing if there is a request through supplementary appropriation bill from the presidency or executive arm of government, and then we approve.

“Of course, depending we have to have a clear-cut definition of how much is going for what, we’re not going to just give approval like that for a general thing. We want to see how the funds will be utilised. But it is mandatory that we provide more resources for our armed forces, and they’re doing well.”

On when the Petroleum Industry Bill, PIB, which is critical to the economy would be passed in the National Assembly, he said “Well, thank God, the two committees of the National Assembly, the joint committee in the Senate and the special ad-hoc committee and Mr. Speaker will say something about that are doing very well, they have been working very hard, they are working jointly, both the Senate and House.

“At the moment, I think they are about to start writing the report, which they will lay before the two chambers of the National Assembly sometime in April, probably by the middle of next month, middle of April.

“And it is our determination and plans and design that we are able to pass the PIB by the end of April, by the grace of God or latest should anything untoward happens before the middle of May.

“But we are determined to pass this PIB by the end of April. The PIB is one essential and probably the most essential legislation, we will have to pass because this is going to change the entire economic scope of Nigeria.

“There’ll be more resources, foreign direct investment flowing into the country, and more certainty that is essential that you can come to Nigeria and invest in the oil industry because there’s a legal framework that regulates the entire environment.

“So we are looking at the end of April or the early part of May.”

On his part, the Speaker of the House of Representatives, Femi Gbajabiamila, while answering questions on the PIB said, “On the PIB, the Senate President has covered the ground or covered the field as we say.

“We made a commitment to the Nigerian people and that commitment is April, end of April. But let me just add that, you know, give or take two-three weeks, as he said, may only… because at the time the commitment was made, we didn’t take into cognizance the fact of Easter break and Ramadan is coming up as well.

“We are still shooting for going for the end of April. But we’re not going to straightjacket ourselves into a particular date when I say the end of April, we are talking thereabout, it may be a week after maybe two weeks after at most, our best.”

The Speaker, who commented on the new Service Chiefs said,”The new service chiefs have hit the ground running from what I can see. They were screened and they were screened very thoroughly, and very vigorously. And they come with a high pedigree.”

He said the House about a week ago set up a 40-man committee special committee on security led by the leadership of the house, the principal officers, and about 30 other members.

“We decided to think outside the box, knock heads together, put heads together employ consultants and look for a way forward. Because sometimes they say there’s an adage that you can’t keep doing something the same way and expect a different result.

“So whilst our committees on defence army and the rest are still working, there’s this special committee of 40 members of the House drawn from every party, every region, to think of ideas to see how best we can move forward in terms of security. And we will present our report to Mr. President, hopefully, next four weeks.”