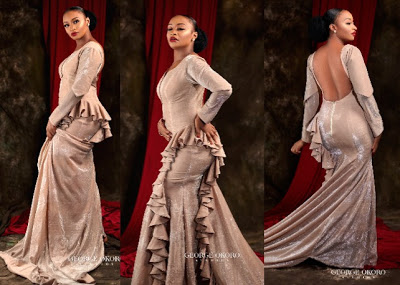 An Islamic scholar, Lawal Gusau, who wrote a petition against the northern actress, Rahama Sadau, has narrated to The PUNCH how the police were able to track her phone and prevent her from fleeing to Dubai, United Arab Emirates.

Gusau, who is also a security expert, had written a petition to the Inspector-General of Police, Mohammed Adamu, on November 3, 2020, demanding that Sadau be investigated for posting a photo of herself wearing a backless gown.

According to the petitioner, the indecent photo attracted blasphemous comments against Prophet Mohammed and this was capable of setting the country on fire on a scale that would make the #EndSARS riots seem like a child’s play.

He said after the IG received the petition, an order was given to the Kaduna State Commissioner of Police, Umar Muri, to investigate the matter but things did not go smoothly because Sadau was in Abuja.

Gusau told this newspaper that the Kaduna CP sent his men to Abuja to pick her up but she went into hiding and quickly obtained a UAE visa with members of her family in order to flee the country.

The petitioner said when the police got a wind of the situation, they began monitoring her calls and were able to arrest her brother.

He said it was her brother who subsequently led the policemen to Sadau.

Gusau stated that while the policemen were attempting to arrest her, an unidentified Commissioner of Police asked the cops to stand down and promised that Sadau would report to Kaduna the next day.

The Islamic scholar, however, said rather than report herself to the Kaduna State police command, the actress again went into hiding.

He said it was unfortunate that a CP could hinder the arrest of Sadau despite the IG’s order that she be investigated.

Gusau said, “I am not happy with the way the police are handling the matter. Rahama Sadau was trying to escape and had obtained UAE visas for herself and her family but the police were able to track her phone and arrest her brother who led the policemen to her.

“The policemen from Kaduna State were about to arrest her and take her to the SCID when a phone call from one CP came in and the policemen were asked to leave her alone and that she would report to Kaduna by herself.

“What gave that CP the power to overrule the IG? Now, Rahama has refused to turn herself in. She is being protected by that CP and some people from the Presidential Villa. This is most unfortunate.”

When asked why he was still pursuing the case despite Sadau’s apology, the petitioner said the apology was not a sincere one, adding that she was only shedding crocodile tears for the camera.

Gusau admitted that Sadau did not make any blasphemous comment against the holy Prophet of Islam but she was the one who caused non-Muslims to insult the Prophet during a debate over the picture.

He, therefore, stated that she would bear vicarious liability for her action.

Gusau said the picture had begun generating outrage in Kaduna State, adding that the CP of Kaduna State had to meet with imams and plead with them not to bring up the topic during Friday prayers at mosques last week.

The petitioner called on the IG to ensure that Sadau is swiftly taken to Kaduna to face a Sharia court which would determine her fate.

In states that practise Sharia, blasphemy carries a death sentence.

Sadau had been suspended by the northern movie industry in 2016 for acting in a manner deemed to be at variance with Islam.

She was also seen hugging American superstar, Akon, in a picture in 2018 which sparked outrage.