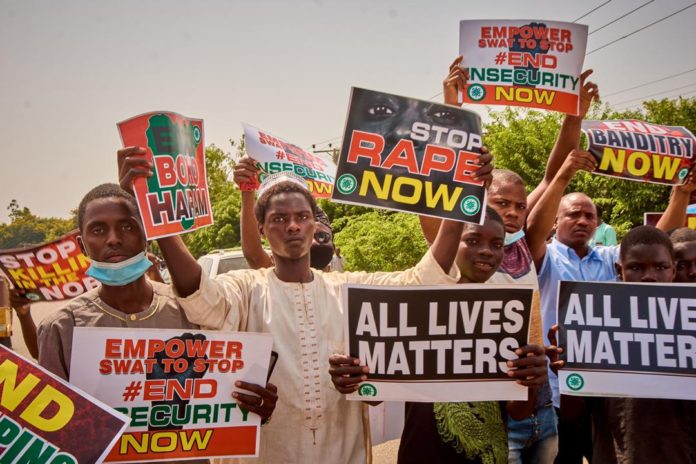 It is saddening what the so called #EndSARS protest has today turned to.

To me these 2 happenings have put a dark spot to the beauty and meaning of the whole protet & the Protesters. It has also no doubt redefined the essence of the protest in totality.
Even though before these two happenings, the protest was clearly regarded as been hijacked by political interests from one region, but it has still some semblance of integrity then. There were several attempts by the people in government to create a kind of counter group to checkmate the #EndSARS Protesters, without success.

The title of my write-up today is simply because of the multiple twists that a simple meaningful protest has taken. It started from some Youths registering their anger and disapproval of the treatment of the citizens – especially the killing of a yahoo boy in the south- by a particular police department codenamed SARS (Special Anti-Robbery Squad). The protest started like a simple and sincere one, but before long politicians took advantage of the situation in the country and hijacked the protest and redefined it to serve their interest.

I want assure you that the same people that benefited from the miscalculations and lopsidedness of this government are the same people that hide beneath the Protesters to continue fueling it and they will continue to do that, if care is not taken, until they achieve what they want. May Almighty Allah help my country.

These and many more questions are still ringing in my head and begging for answers.

You see, I am really disturbed and worried to what this uncontrolled protests will lead to, because it is daily taking new and dangerous dimensions and transforming into a kind a monster that we may not be happy with at end.

The government must understand that it has made so many blunders as a government and offended almost all the citizens especially the Northerners, and that is the more reason why the people from the North are feeling like it has no business depending it in this trying times of the government. The Northerners are feeling that in all the 6 years of this government it channelled all it energies and resources to the development of the South especially the Southwest region, so why should they worry if the same people are now giving the same government headache? And when you critically reason with their feelings, it cannot be far from the truth. So sad.

The government must treat this very dicey and delicate situation with all the carefulness it deserves.

May Almighty Allah save Us from Us, Amin.