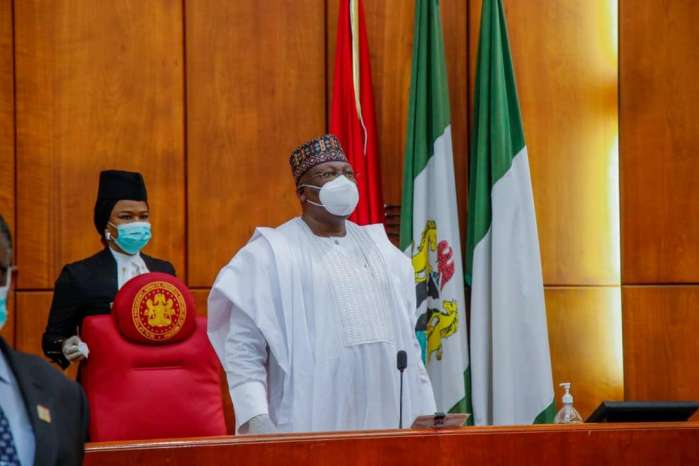 Amid protests, on Wednesday, the Senate confirmed the nomination of 39 career and non-career ambassador-nominees submitted to it by President Muhammadu Buhari for screening and confirmation.

The 39 cleared and confirmed were out of the 41 names sent to the Senate by the President.

The confirmation was sequel to the presentation of the report of the Senate Committee on Foreign Affairs by its Chairman, Senator Muhammadu Bulkachuwa (APC, Bauchi North).

However, trouble started when Senator Bulkachuwa was presenting his report on the confirmation of the nominees and the process was almost aborted, as some senators tried to stop him, while others demanded confirmation of nominees from their states be stepped down.

Particularly, the Senate Minority Leader, Senator Enyinnaya Abaribe (PDP, Abia South), asked Senator Bulkachuwa to explain the criteria the committee used in arriving at the nominees, submitting that while some states had three nominees, others had one.

Abaribe said: “I just want the chairman to enlighten Nigerians on the criteria with which the nominations were made. Some states have three, some one. So, on what basis were the nominations made?”

At this point, Senator Abaribe was immediately overruled by the President of the Senate, Senator Ahmad Lawan, who asked Chairman of the Senate Committee on Foreign Affairs to ignore the question.

Recall that President Muhammadu Buhari had, in a letter dated June 17, entitled “Appointment of Non-career Ambassadors”, sought confirmation of the nominees by the upper legislative chamber.

Another senator, who protested was the Senate Minority Whip, Senator Tanimu Aduda (PDP, FCT), who kicked against the list of nominees, as he noted that the Federal Capital Territory, FCT, had none.

Also, Senator Gabriel Suswam (PDP, Benue North-East), and his counterpart from Taraba Central, Yusuf Yusuf, equally demanded that confirmation of nominees from their respective states be stepped down.

The Senate president, however, overruled them, insisting that nomination of ambassadors designate was an Executive function.

He said: “It is an Executive function. What we always say is that when people are nominated, they are always advised to liaise with their senators.

“So, we want to advise the nominees to meet with their senators. We can’t sit here and decide. It is an Executive function; it is their prerogative.”

The non-conformation was based on the committee’s report which read “the nominee from Niger State appeared and he was screened, but the committee suspends further legislative action on his recommendation until the matter surrounding his nomination is resolved.

“The 42nd nominee from Yobe State is yet to appear due to a certain mix-up and the screening of the nominee was stood down to a later date, pending the resolution of the matter.

Also approved was Suleiman Sani from FCT as a career ambassador-designate.