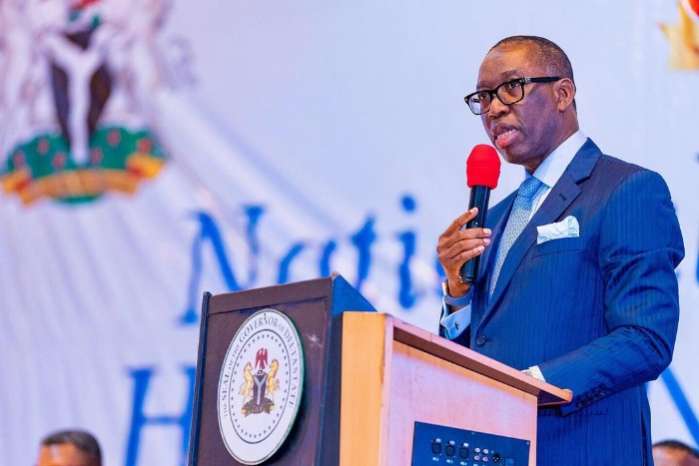 Governor Ifeanyi Okowa of Delta State has described the Supreme Court ruling which sacked Bayelsa governor-elect, Mr David Lyon and his running mate, Biobarakuma Degi-Eremienyo, as a welcomed development for the Peoples Democratic Party, PDP, and its candidates in the governorship race, Senator Douye Diri and Senator Lawrence Ewhrudjakpor.

He congratulated the PDP and the party’s Governorship candidate and his running mate over Supreme Court ruling.

Okowa in a statement by his Chief Press Secretary, Mr Olisa Ifeajika, in Asaba, stated that his confidence in the Judiciary had been rekindled by the didactic ruling of the apex court.

He urged PDP and the governor-elect to take steps to reconcile all stakeholders in Bayelsa in order to strengthen the party for future elections.

“We are happy because the Supreme Court has once again restored the confidence of the people in the judiciary.

“This victory is a clarion call on the party and the governor-elect to take steps to reconcile all aggrieved party members who defected or worked against the party in the Nov.16, 2019 Governorship Election in the state.

“This is very important because there is need to rebuild the confidence of the people in our party, going forward.”

Continuing, the Governor said: “On behalf of the government and people of Delta, I congratulate our great party, the PDP, on the victory at the Supreme Court.

“It is my prayer that God will usher in a new lease of life for Bayelsans as a new administration takes over in the state. I also congratulate my brother governor, Chief Seriake Dickson, for a successful tenure in office.”