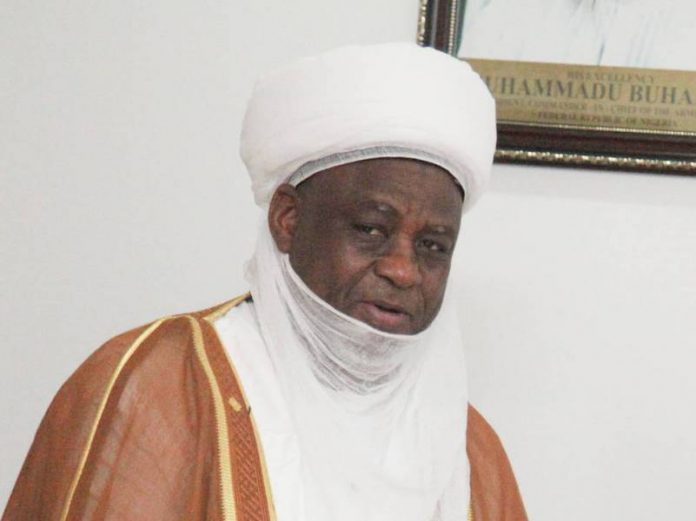 Sultan of Sokoto, Alhaji Sa’ad Abubakar has disclosed that without good governance and justice, it would be difficult to have peace and security in the country.

Just as the Ooni of Ife, Oba Adeyeye Ogunwusi urged political leaders who cannot protect the lives and properties of the populace to allow competent hands take over.

They spoke at a security summit with the theme; National Security and Insecurity: Roles of Traditional Institutions, organised by the Centre for Black Culture and International Understanding, Osogbo on Wednesday.

The Sultan maintained that some security issues were the product of corruption on the part of political leaders across Nigeria.

He also emphasised that the nation’s elite were the problem of the country by manipulating the common man to achieve their selfish aims, saying the elite has the capacity to resolve the crisis confronting the country if it resolved to do so.

He berated the nation’s political system that relegated traditional institutions to the background, saying monarchs have been running their territory peacefully before the advent of colonialism, which takes away their powers.

“If you keep quite and don’t get up to see how we can help our political leaders on this issue, then we are part and parcel of the problem when you keep quite in the face of injustice. And Almighty Allah would ask you on that day when you have nobody. How you have used your position to help the common man. And if you have no answer, God has a way of rewarding you and I don’t pray for that for anyone”.

“So we should speak out the truth all the time without being afraid of a governor or local government chairman or chairman of Traditional council threatening you. If you are convinced speak out and stand by it”.

“I have always said it that the problem of this country are us, the elite. If we want to deal with these problems we can do it. We have always used the common man who doesn’t have anything to get what we want and lord it over them. I urge elite to visit graveyards to see their rich predecessor and understand that no one would depart this world with anything”, he said.

He stressed the need for traditional institutions to hold political leaders accountable for their failure to provide social infrastructure which could stem the tide of social problems.

“We should speak with one voice on issues that are social that could lead to security problems. I spent 5 hours between Lagos to Ile-Ife because since 1999 the road has been under construction and it is seems to be taking eternity to complete.

If any mad man throws a bomb at a car, so many lives would perish on that road. We should collectively put pressure on government to complete the road this year”, the Sultan said.

Meanwhile, Oba Ogunwusi said government must provide adequate security to enhance socio-economic development of the country, stressing that its high time to act and stop the regular rhetorics about insecurity.

He added that anarchy looms in any society where there is breakdown of law and order the leaders lost grip, saying any leader that lost grip of societal control do not deserve to be accorded any respect.

“If there is breakdown of security obviously anarchy will set in and that is how communities and nations, usually lose grip. The most important thing is our security and that is why we have a common means of governance in Nigeria. We have our Governors as the chief security officer of various states and our President as the chief security of the entire country. It is very important that if any government should lose that grip that leader shouldn’t even be worthy to be a leader. A leader that can not secure lives and property of his people should just surrender and allow capable hands to take over.

It about time for us to know the real role of the natural rulers across the entire county. We traditional rulers should now come together to support what the governors of southwest are doing. They are trying to set an example with Amotekun.

All traditional rulers are been carried along. We know our people. Nobody is breaking Nigeria, we don’t even pray for such and it will never happen. All that we are doing is to set good leadership and example on how to secure our people and try to see how we can re-engineer the ways things are done”, he said.

Meanwhile, Osun State Governor, Adegboyega Oyetola, called for holistic approach in the quest to end security challenges in the country.

He said, for the country to overcome the menace, security agencies must collaborate with the traditional rulers, sensitise and encourage their subjects to provide intelligence and expose the criminals in their domains.

The former governor of the state, Prince Olagunsoye Oyinlola, has expressed conviction that it is not too late to pull Nigeria back from the brink and save the country from Boko Haram, banditry and the myriads of other security problems that are threatening its corporate existence.

Oyinlola, who is the chairman of the Board of Trustees of the CBCIU, lamented the present precarious security situation in the country, saying the country had almost become the modern version of the Hobbesian state “where life is nasty, brutish and short.”

The CBCIU, he said, “feels that this is the time to harness the intelligence-gathering and conflict-resolution abilities of our monarchs for the safety of Nigerians and the stability of Nigeria.”

“While the government has continued to adopt an uneven carrot and stick approach to addressing security issues in the country, it is noted that very scant attention is being paid to the huge difference which the involvement of our traditional institutions would make in calming the furious oceans of terrorism, banditry, kidnapping and other violent crimes that currently threaten to overrun everyone and sink the ship of Nigeria.

“This conference seeks to bridge that operational gap and come up with ideas that will further tighten the noose round the neck of the enemy.”

Traditional rulers at the conference included the Ooni of Ife, Oba Enitan Adeyeye Ojaja II; the Sultan of Sokoto, Alhaji Muhammad Sa’ad Abubakar; the Olowo of Owo, Oba Ajibade Gbadegesin; the Olubadan of Ibadanland, Oba Saliu Adetunji, who was represented by the Agba-Akin Olubadan, Chief Lekan Alabi; the Timi of Ede, Oba Adesola Lawal; the Owa of Obokun, Oba Gabriel Adekunle; the Olokuku of Okuku and the Akinrun of Ikirun, Oba Rauf Olawale.