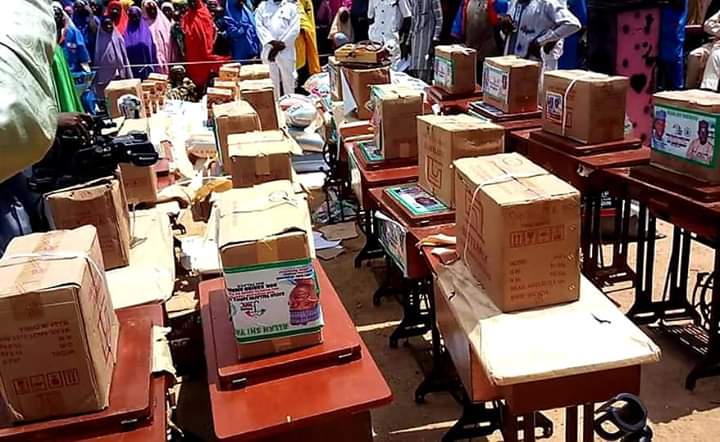 The lawmaker said that the gesture was aimed at addressing poverty and creation of employment opportunities, as part of his promises during campaign.

“The distribution of 50 sewing machines, 15 motorcycles, 12 fridges and 12 grinding was aimed at empowering vulnerable women and youths in the constituency to enable them to learn new skills and be self-reliant.” Hon. Mai-Palace said.

“We always look forward to this kind of massive empowerment. If you remember, recently I empowered nearly 1000 women and hundreds of youths between these two local government areas.” He said.

“Sometimes people don’t need help in the form of money and things, they just need some means to stand up on their own feet. That is why we thought of giving the sewing machines, grinding machines, fridges motorcycles and food stuff among other items to them and we hope this will not only support their family income but also be the first step on their way of being self-reliant,” said Mai-Palace.

Underlining the idea behind the campaign, Honourable Mai-Palace said: “Youths and Women empowerment is one of my plans to turn youths and women to being self-reliant and this is the starting point.” He said.

In addition to the sewing machines, the youths were also given bags of rice and boxes of spaghetti, deep freezers and fridges, modern electric sewing machines, motorcycles amongst other items.

He however called on other lawmakers in the state and others at the National Assembly to follow suit, as the gesture would help eradicate the poverty that bedeviled most of the poverty in the country.

Speaking in tears, some beneficiaries said that they have been wanting to get a sewing machine for a very long time but were not able to afford it.