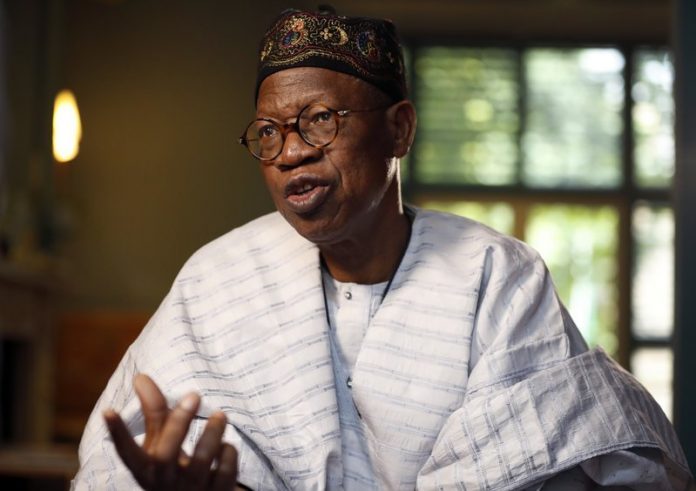 Lai Mohammed, minister of information and culture, says 95 percent of arms used in kidnapping and banditry in the country come through the porous land borders.

Speaking on Monday at the Seme border, the minister said neighbouring countries have not been playing by the rules as regards the ECOWAS protocol.

“Overtime, Nigeria has been confronted with numerous trans-border economic and security challenges. These challenges range from banditry, kidnapping, smuggling, illegal migrants and proliferation of light weapons amongst others,” he said.

“It is however disturbing that some neighbouring countries circumvent the ECOWAS protocol on transit. For clarity, the ECOWAS protocol on transit demands that when a transit container berths at a seaport, the receiving country is mandated to escort same without tampering with the seal to the border of the destination country. Unfortunately, experience has shown that our neighbours do not comply with this protocol. Rather, they break the seals of containers at their ports and trans-load goods destined for Nigeria.”

Mohammed said the closure has curbed the smuggling of foreign rice and other prohibited items into the country.

He said from his interaction with rice millers the border closure has enhanced the production of local rice.

He also said the patronage of Nigerian rice has increased, and that farmers are increasing their scale and engaging more hands.

The minister said the exercise has curbed the diversion of petroleum products from Nigeria to neighbouring countries.

According to him, items worth more than N3 billion have been seized and disallowed from entering the country since the exercise began.

“It is important to note that 95 percent of illicit drugs and weapons that are being used for acts of terrorism and kidnapping in Nigeria today come in through our porous borders. However, since this partial closure, the acts have been drastically reduced. Our conclusion is that, the arms and ammunition these terrorists and criminal elements were using no longer gains access into the country. In addition, the drugs which affect the health and the wellbeing of Nigerians have equally been reduced.

“The government, through diplomatic channels will continue to engage our neighbours to agree to comply with the ECOWAS Protocol on transit. Goods that are on the prohibition list to Nigeria, such as rice, used clothing, poultry products and vegetable oil should not be exported to the country. As a result of this closure, Niger Republic has already circulated an order banning exportation of rice in any form to Nigeria. In addition, the National Assembly has supported the executive directive on the border closure and the efforts of security agencies in executing the task.”

The minister added that the swift response exercise coordinated the by the office of the national security adviser (ONSA) in collaboration with the military and paramilitary has strengthened inter-agency relationships.

The federal government has commenced the bidding process for the sale of assets recovered and forfeited to the Economic and Financial Crimes Commission (EFCC). Abubakar...
Read more