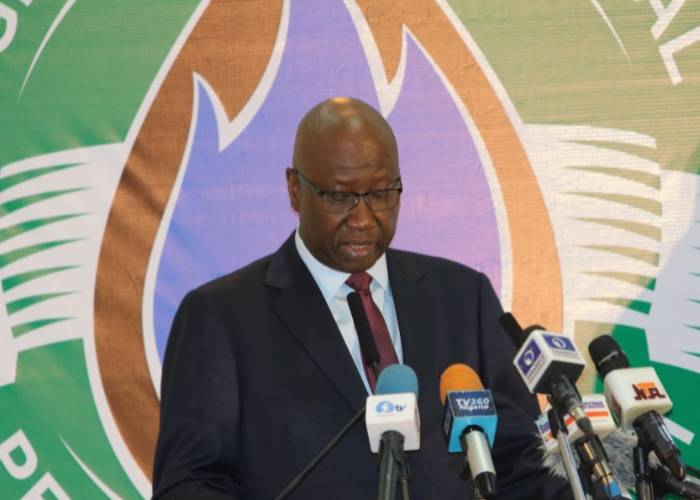 The Secretary to the Government of the Federation, Boss Mustapha, the Chairman, Presidential Advisory Committee Against Corruption, Prof. Itse Sagay (SAN), and others on Tuesday said corruption had not ended despite the President Muhammadu Buhari administration’s efforts to stamp out the scourge.

Speaking at an event in Abuja, the stakeholders highlighted steps that needed to be taken to strengthen the government’s anti-corruption agenda.

The event, tagged, ‘One-day Dialogue Session on Strengthening the Anti-Corruption Agenda: Ensuring Accountability and Transparency’ was co-organised by PACAC and the Centre for Democracy and Development with the funding provided by MacArthur Foundation.

Others who delivered goodwill messages suggesting various ways of boosting the fight against corruption at the event included, the Director of CDD, Idayat Hassan, the Chairman, Senate Committee on Anti-Corruption and Financial Crimes, Senator Suleiman Kwari, and the Director, Africa office, MacArthur Foundation, Kole Shettima.

Represented by the Permanent Secretary, Special Services, Amina Shamaki, the SGF said the Buhari administration had since 2015 when it came on board, recorded “unprecedented level of successes” in the fight against corruption by securing “the most number of convictions, including very high profile personalities” and making “world record recoveries in terms of money and assets”.

But he said despite the successes recorded, the anti-graft war had not been won.

He said, “Nonetheless, we should not rest on our oars with the illusion that the war has been won despite the level of the successes I have enumerated.

“While the fight has been very successful in tackling monumental corruption, less grandeur cases are perceived and even reported.

“While the government has displayed uncommon courage to relieve its appointees especially, in its agencies, of their positions and responsibilities, there still exist some level of infractions on Public Procurement Act, and other laws. These tend to diminish the efforts of government in this direction.”

To end corruption, he said there was the need to bring about “innovative legislations, policies and measures to deal decisively with the lingering acts of corruption.”

He also said the roles of audit departments/units and auditors in aiding and abetting corruption in ministries, departments and agencies should be addressed.

He advocated that auditors who sanction corrupt payments should be prosecuted alongside the main culprits in corruption cases.

He added, “I should like to see the Office of the Auditor-General for the Federation come up with innovative policies and measures to empower auditors to halt any payment that is clearly in breach of Public Procurement Act, Financial Regulations, Public Service Rules in particular, and other laws, in general.

“For such auditors that compromise, or are complicit, such policies and measures should isolate them for disciplinary action which should not preclude prosecution.”

On his part, Sagay said the consequence of corrupt acts, included “massive unemployment, unequipped clinics and hospitals, wretched schools, colleges and universities without facilities, bad roads, lack of electric power and so on.”

“Deaths on the roads, deaths at hospitals, deaths at maternity facilities, follow and militants, kidnappers, armed robbers, murders, suicides are also a direct product of this Nigerian culture,” he added.

As a short-term solution to the corruption problems, Sagay suggested that “the existing Nigerian Financial Intelligence Unit structure be adopted as the centre of Nigeria’s intelligence databank for sharing information and intelligence on corruption.”

The CDD director, Hassan, who was represented by the organisation’s Senior Programme Officer, Lukman Adefolahan, also said “a lot more still needs to be done to strengthen the fight against corruption, promote accountability and transparency”, despite “the great strides” that had been made in the fight against graft.

She added, “These different dimensions of corruption have characterised Nigeria’s landscape and by implication made it be consistently rated among the most corrupt countries in the world by Transparency International in its Corruption Perception Index.”

She called for “pragmatic measures to curb corruption” for Nigeria’s future given the implication of the problem on security, political, social, and economic prospects of the country.”

Senator Kwari said the Senate through its committee on Anti-Corruption and Financial Crimes “is also reviewing all the anti-corruption and financial legislations with a view to bringing them in line with current day realities and making them more effective.