THE 9 KANO KIDNAPPED, RENAMED, CONVERTED AND SOLD CHILDREN: A DANGEROUS AND WORRYING DEVELOPMENT. 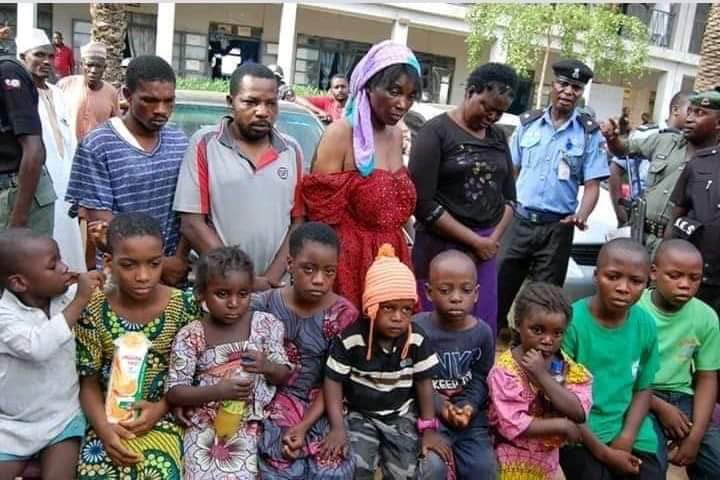 The picture below will take a very long time to be erased from my memory. You can make what to make of it, but is the picture of the 9 kidnapped Kano children that were renamed, converted to Christianity before they were sold for either adoption or slavery in the Igbo land. The picture also has the faces of those ciriminal Igbos that perpetuated this unimaginable heinous crimes, about 8 of them so far arrested by the Nigerian Police in connection with this unimaginable crime.

This unfortunate and very worrying crime was reported in the online DailyNigeria of Tuesday, 12th of October, 2019. According to the report, taking samples of two of the children with original names as Umar Faruk Ibrahim and Aisha Muhammad Abdullahi were renamed as Onyedika Ogbodo and Ozioma Ogbodo respectively before they converted to Christianity and be sold out.
The report also revealed that 2 more Igbos were caught in Dakata area of Kano State trying to smuggle out a kidnapped Muslim kid from Kano to an unknown destination in the Eastern part of the country. This development is to say the least very sad, so terrible, so Dangerous and so worrying as well.

The government and people of Kano State must demand a full and thorough investigation on this seriously dangerous development, this is so because this one might be just an iceberg of a carefully coordinated crime syndicate that has been going on for only God knows how long in our State. So many of our missing children might be either converted Christian Igbo pastors, hardened criminals and slaves within our midst or spread across the country at-large. Also the syndicate might not be operating only in Kano, it may be the whole of the North or at minimal in the Northwest and Northeast regions. Our Northern Governors must follow this to a logical conclusion. Our Human Rights and Child Trafficking advocates must wake up and follow this issue with all the seriousness it deserves.

Every Muslim Northerner must be worried and get involve in unraveling and decisively dealing with this very dangerous development, because your child might be the next victim.

The danger is, in the near future we may be faced with hardened criminals that are from us, and who knows, even this Boko boys that are resistant to all these aggressive military attacks might be some of the products of these Northern Muslims converted Christians. Who knows? It may have been going on for long, and is only now that it is busted.

It would be unimaginable to think your own children would be the ones that would be declaring war against you, killing their own in the name of ethnic cleansing not knowing who they are killing. Because this and many more might just be the grand plan. Just come to think of it, when a child of less than 3 years is kidnapped, renamed and converted to Christianity and trained in a particular way, what do you expect? You must understand that, such a child has completely lost his identity(be it tribe, religion and culture) from a well-cultered Muslim Hausa/Fulani to a specifically trained Christian Igbo. So what would you expect from such individual? The earlier we attack and tackle this issue the better for us all.

You can imagine if these 9 children are Christians Igbos kidnapped and converted to Islam and brought to Kano, I am sure by now all the Igbos Governors might be in Kano with their outrageous demands, and by now all the known and even unknown media outlets would have been with a single news item with sensational captions. But because it is the reversed, look at how it is being played down.

I must suggest that all the Muslims organizations must come with one voice on this. We must get to the root of this whole thing, uproot it and kill it dead. Period.

As an immediate measure, the Kano State government MUST COME STRONG ON THIS, AND MUST ACT FAST AND DECISIVE AND ALL OF US MUST TALK WITH ONE VOICE IRRESPECTIVE OF OUR POLITICAL AFFILIATION. THE KIDNAPPED, RENAMED, CONVERTED, SOLD CHILDREN HAVE NO ANY POLITICAL PARTY, IN FACT THEY DON’T EVEN KNOW ANY POLITICAL PARTY, BUT I AM SURE THEY KNEW THEIR STATE AND RELIGION, THEREFORE WE MUST STAND UP FOR OUR STATE, CULTURE AND RELIGION.

THIS CONVERTION MUST STOP AND THE CULPRITS MUST BE SEVERELY PUNISHED.

May almighty Allah save Us from Us, Amin ya rabbi

By Bashir Jammaje Nearly all men can stand adversity, Robert Green says, but if you want to test a...
Read more
News

By Ahmad Sajoh The advent of Coronavirus otherwise called Covid 19 is indeed a major challenge for the whole...
Read more

The federal government says it has opened the portal for Nigerians to apply for its N75 billion youth investment fund.
Read more
Load more