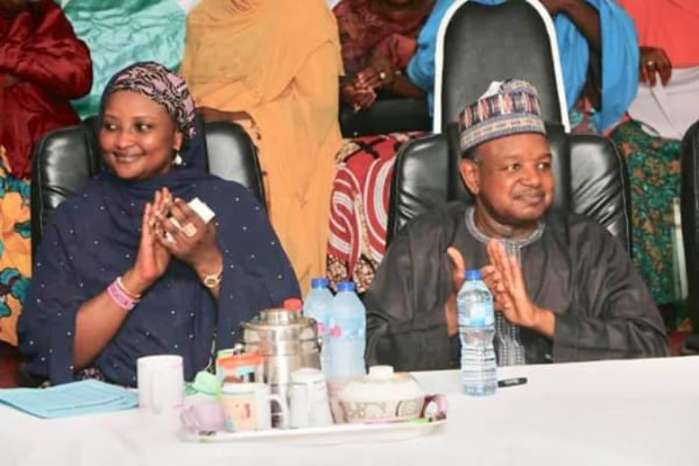 The announcement of the commencement of payment of new minimum wage in September, 2019 by Kebbi state government came to the people of the state especially civil servants as a big surprise.

When the announcement was made on Monday 23rd September, 2019 by the Secretary to the Kebbi State Government, Alhaji Babale Umar, flanked by the Head of Civil Service of the State, Alhaji Musa Tanko Magaji and some directors at the Cabinet office in Birnin Kebbi, even the curious journalists that converged to cover the pronouncement by the SSG thought it was just a routine press briefing on entirely a different issue.

But to the surprise of all, the SSG said the Kebbi State Government has approved new minimum wage of N30,000 to state workers with effect from this month. He stated that: “In line with the signing of the new minimum wage legislation by President Muhammadu Buhari, and cognisance of Kebbi Government’s commitment to workers’ welfare, Governor Atiku Bagudu has graciously approved for the immediate payment of minimum wage of N30,000 to the state civil servants with effect from September 2019”.

He further opined that the implementation was sequel to the consultation with members of Kebbi State House of Assembly, leaders of labour unions and relevant government agencies.

Soon after the announcement, the information quickly circulated to the entire state within a short period owing to the fact that the information went viral through the social media even before the conventional media released their part of the story.

Many workers in the first place did not believe the information they got through the social media for they consider it an unreliable source of information, even with the picture of the governor, and the SSG who made the announcement pasted on such messages, for the notion that the information could be a fake news.

However, their doubt began to fizzle out when the online stories of some major newspapers came out some hours after the announcement. It was joy, laughter and jubilation over the unexpected information. Civil servants were seen jubilating over the matter.

With the announcement and subsequent implementation of the minimum wage, Kebbi State now takes the lead in northern Nigeria and perhaps one of the few states in the country to douse the tension or controversy surrounding payment of N30,000 minimum wage.

This is being achieved even with the lean resources of the state government that heavily depends on its monthly allocation from the federation account and meagre internally generated revenue amounting to a paltry over N300 million, to pay workers their salaries.

It will be recalled that in 2017, the Commissioner of Finance, Alhaji Ibrahim Augie, during a ministerial briefing organized by the Nigeria Union of Journalist (NUJ), Kebbi State said that the state generated N6.4 billion IGR in two years.

“The board of Internal Revenue contributed a total of N6,441,185 to the state coffers since inception of this administration in 2015 ‘’, he explained.

Perhaps why most people especially the hardworking state’s civil servants viewed the increment as a surprise was because the state has a history of not implementing wages accordingly. Even the N18,000 minimum wage introduced by the then President Goodluck Jonathan-led administration was not fully implemented by the immediate administration of Alhaji Saidu Nasamu Dakingari. This led to series of strikes by labour unions in the state spearheaded by Nigeria Labour Congress (NLC) and Trade Union Congress (TUC). Hence, workers in the state did not enjoy the full implementation of N18,000 minimum wage. Certain percentage was merely approved by the previous administration.

However, the state has a good history of prompt and regular payment of workers’ salary. Even under the present administration, salaries are paid on a regular basis.

It is a known fact that resource constraints has been the major obstacle for states to pay the new minimum wage, but even the Bagudu-led administration has agreed to pay as said by the SSG.

“In spite of the resource constraint, the state government has decided to implement the new minimum wage, no employee of the state government shall receive less than N30,000 while other employees would also receive the same wage as agreed upon the consequential increase of the allowances in line with the guidelines,” he emphasized.

However, local government areas were encouraged to take steps to improve their revenue base so as to implement the new minimum wage.

“Local government councils are encouraged to review their revenue profiles and take steps to implement the new minimum wage legislation immediately,” the secretary to the state government said.

A cross section of civil servants who spoke on the development expressed their happiness with the increment.

Bello Adamu, 58, a civil servant in the state, thanked the Kebbi state government for taking the lead in the implementation of the 30,000 minimum wage.

He said: “I remain thankful to our governor. He has really tried for us. My purchasing power has now increased.” Another labourer, Jabbi Sadu, stated that: “We have now entered next level in Kebbi on a positive note. Thirty thousand Naira is not a small money for me, I am really happy over the matter”.

Hadiza Sahabi, a married woman aged 32, on her part said she would use the additional money from her salary to improve her business and support her family. Abubakar Sule is another civil servant in Kebbi who used to earn less than N30, 000 per month, but with the implementation of the minimum wage, he now earns more than that.

He warned labour leaders in the state to accept the new minimum wage as presented by the government in view of the dwindling economy.

However, the announcement of the new wage has generated some shock waves to the organized labour in the state. The Kebbi State Chairman of NLC, Comrade Umar Alhassan Halidu, after the union’s meeting said government did not carry them along on the issue of the implementation of new wage to workers before arriving at the decision. Although he described the new minimum wage as a welcome development especially for grade level 1 to 6 workers, he stated that the bone of contention was those from grade 7 upwards. He appealed to government to revisit the issue based on principle of fair bargaining.

The Speaker of the House of Representatives, Femi Gbajabiamila, has disclosed that he will not sign the 2021 budget if provision for...
Read more
News

President Muhammadu Buhari has thrown his weight behind the peaceful protest against police brutality and calls for institutional reform in Nigeria.
Read more
Load more