ZAMFARA: WHAT RUGA MEANS TO MATAWALLE 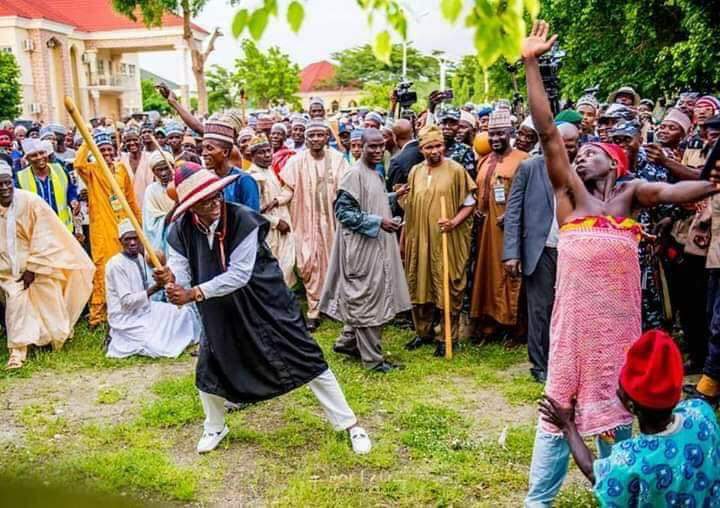 Created 23 years ago, Zamfara was curved out of the old Sokoto State. Largely agrarian, it stood out as a agricultural hub for the whole of the north west zone with 70% of its populace living and farming in rural areas.

Prior to its elevated position of a state, Zamfara was a proud producer of grains of high quality due mainly to its rich fertile soil encased between sedimentary rocks.

This envious position informed decision makers of colonial era to extend rail line up North that cut Gusau, the state capital, into two halves, terminating at Kaura Namoda – a commercial city itself of old that links Niger Republic through Jibia in Katina State.

This railway line covering several kilometers, assisted greatly in moving grains and other farm produce, including cotton and groundnut to the Lagos port sea-bound to the United Kingdom, the then Nigeria’s colonial master. This in no small measure assisted greatly to power its industrial revolution.

Where there are farmers, there are herders, as their lives intertwine. Each one needing the other for support. For decades that cordial relationship existed with each one respecting the territorial integrity of the other.

Zamfara was a model of peace until recently when land for farming activities became a scarce commodity and livestock rearing became a risky investment. Tempers flared, and what ensued later, though an expected social phenomenon, degenerated from few fiscuffs to deadly skirmishes.

There was no love lost between farmers and cattle herders. Zamfara became a theater of war of some sorts; details of which are already in public domain, and need no repeating here. It will however linger in our memory for some time to come.

Thank God Almighty, we are now in celebratory mood that a responsible and responsive government is in place, which came about through divine intervention. Zamfara of today is unlike what it was eight years ago. Eight years of neglect, indecision and misgovernance. Chronicling this eight years, though not the subject of this discourse, will not be dismissed outright because they underpinned what ought to have been done if only the powers that be then had listened to wise counsels and tailored their policies to reflect the needs of the ordinary people of Zamfara. That, they failed to do but pandered to elite proclivities.

Today Dr. Mohammed Bello Matawalle is the governor of Zamfara State, a state with a proud motto of Farming is Our Pride. Not one given to unbridled ambition, Matawalle journey to Gusau Government House began in 1999 when he contested and won a house of representatives seat for Bakura/Maradun federal Constituency. He knew what he wanted and what was needed to be done.

He approached them with patience but dogged determination until the ultimate prize was had – to govern a people he loves the most. He saw right from onset that his predecessor governments won’t leave any endearing and positive legacy.

His prediction came to pass; the 20 years of Senator Ahmed Yarima down to the Abdulaziz Yari administrations accorded lip service to the welfare of the rural populace who were the movers of the state’s economy through farming. With solid minerals buried under its soil Zamfara also had potential to be great. Harnessing these though were done half-hearted through ill conceived policies exposed the rural populace to attacks by bandits.

Bandits and cattle rustlers who were on countless murderous campaigns to illegally exploit the precious metals the state is endowed with. The gory details of what transpired is a subject of another day.

What is of importance for us here is how Matawalle has hit the ground running since he assumed the mantle of leadership of the state on May 29 this year. At various fora he stated his resolve to end the unending farmer-herder crises once and for all. An opportunity knocked on his door with the announcement of the RUGA initiative.

To the Zamfara governor the innovative idea could not have come at a better time. To him, RUGA means the upliftment of millions out of poverty through harmonious living between those who till the land and their counterparts who tend to livestock.

An idea that fits perfectly with his programs even if the rest of the country chooses to reject for sinister political reasons.

Under a program of action, his government plans to construct dams and canals to serve as watering holes for animals as well as dry season farming through irrigation.

The dams will also provide portable drinking water consisting of 12 hand pumps and four solar powered motorized boreholes that will provide 5000 litres of water daily.
The Matawalle RUGA initiative is proposed for launch on an earmarked 100 hectares expanse of land to provide among other social amenities primary and secondary schools and an Islamiyah.

For the promotion of healthy living the RUGA initiative will provide a 30-bed hospital and a veterinary clinic for livestock vaccination. The state of the art hospital shall consists of a surgery, pharmacy, laboratory, a theater and an antenatal, women and children departments.

Commerce will also enjoy a pride of place within this 100 hectare land to be boosted with 140 lock-up and open shops
Of course religion as the pillar of sound moral values is accorded due recognition in Zamfara which incidentally pioneered sharia implementation back in early year 2000.

Though it had its drawbacks, Matawalle still believes an egalitarian society can only materialize if a people is guided by the tenets of their faith. In the original Sharia implementation format, mosques were built in every village and hamlets; beautiful edifices they were as masjid but lacking in knowledgeable worshippers. The purpose was therefore defeated.

Little wonder majority of bandits and cattle rustlers were not only illiterate but stiffed in ignorance of their professed faith. Masjids will henceforth be not only centers for prayers but learning.

Lack of which was the reason to the bandits human life meant nothing. Matawalle is changing the narrative. Parents both male and female including their children and wards will be taught what it’s to be a Muslim. Aside that, they will be taught vocational skills to manage their environment and take advantage of such facilities as a modern abattoir, dairy production centers and a small scale hides and skin processing plant.

All works and no play makes Jack a dull boy is an old saying. Matawalle believes in it too. To this end he intends to revive the good old Fulani Sharo. Lest we forget, a maiden edition was staged during the recent Sallah festivities in Gusau, the state capital. Guest from far and wide graced the occasion. The governor has since announced it will be an annual event.

To cap it all the vast expanse of land housing the RUGA will be connected to the National Grid for constant power supply.

You bet this new city in the making will be a marvel to behold. A grass band is proposed to be planted around the area that will germinate within 16 weeks for animal feed, and for esthetic beauty. The weather elements will be taken care of as best as possible with the settlement being covered with shelter belts.

To Matawalle this is the beginning of reinventing Zamfara State. And the job has just begun.

Yusuf Idris Gusau is the Director-General Press Affairs to the Zamfara State Governor.

The Speaker of the House of Representatives, Femi Gbajabiamila, has disclosed that he will not sign the 2021 budget if provision for...
Read more
News

President Muhammadu Buhari has thrown his weight behind the peaceful protest against police brutality and calls for institutional reform in Nigeria.
Read more
Load more