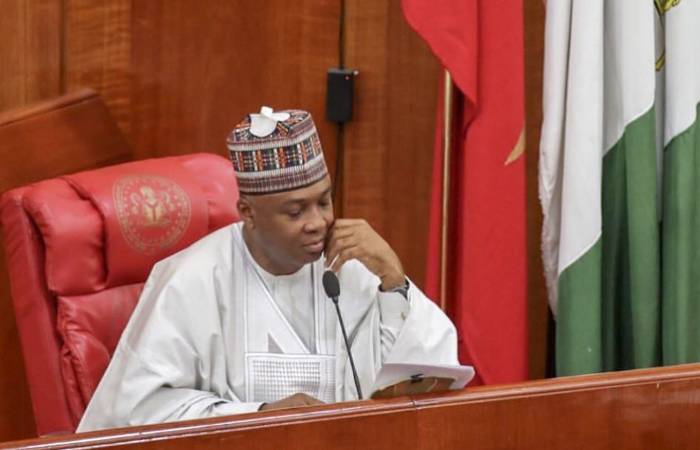 The President of the Senate, Dr. Abubakar Bukola Saraki, on Monday explained the controversial refusal of the Senate to confirm Ibrahim Magu as the substantive Chairman of the Economic and Financial Crimes Commission.

Saraki said that Magu’s appointment may have been confirmed but for the failure of the Presidency to explore the established channel of lobby.

Besides, he said that “political solution” should have been applied after the Senate rejected the nomination twice.

The Senate President spoke at the orientation programme organised for Senators-elect and House of Representatives members-elect ahead of the inauguration of the Ninth National Assembly in Abuja.

Saraki attempted to parry the questions on why the National Assembly did not go to court for a definite pronouncement on the failed confirmation of Magu’s appointment as EFCC’s substantive chairman.

He was forced to respond when the question was asked repeatedly.

Saraki said it is left to the Executive arm of government to find a replacement of any ministerial nominee rejected by the Senate.

Talking specifically on Magu’s nomination, he said there was no doubt that the Senate has the power to confirm or reject his nomination.

On why the Senate did not go to court for a pronouncement on whether the Senate has the power to confirm the EFCC chairman, he said there were over 12 court cases pending on the issue.

Saraki, who said some of the cases had been pending in court for over two years, added that he cannot explain why the cases have not been decided.

“When the Executive makes appointment, there is issue of lobby. This is why we want a particular nominee. It is done even in America.”

On the election of presiding officers of the Ninth National Assembly, Saraki advised senators-elect and members-elect that they should be in the chamber on the day of inauguration.

He insisted that the inauguration and election of presiding officers only take place on the floor of the two chambers of the National Assembly.

In the course of his presentation, Sani-Omolori said one of the functions of the Senate is the confirmation of nominees from the executive arm of government.

Sani-Omolori said he was not in a position to answer political questions and referred the question on Magu to Saraki.

Saraki noted that the options are that the President can lobby the legislature or present someone else at the event of rejection of a nominee.

Saraki said: “The point I am making is that we should not make too much news on the process of electing a presiding officers. What is important is for the members of the Senate to decide who is the best to lead them so that they can have stability.”

On non-confirmation of Magu, Saraki said: “The truth really is that the issue of confirmation whether ministerial or other appointments, is done by the entire Senate. Generally, we have an unwritten practice that we would get the input of senators from the state where the appointee hails from before we start the screening process in the Senate. By the powers of the Senate, if such a nominee is rejected, then it is upon the executive to find a new replacement. The issue really is that the Senate has the powers to reject a ministerial nominee.

“On getting judicial interpretations of their roles, there are 17 cases in court that have been on now for two years and for one reason or the other, those cases have not moved. I cannot explain what happened. They are cases that have to deal with asking the courts to give judicial interpretations to who has the powers to do one thing or the other. I am sure by the time the judiciary gives the interpretations, there is no doubt about it that it will be clear that it is the Senate that has the powers.

“In things like this in a democracy, there must be a political solution, there must be dialogue. I think that is the most important thing. The Senate has the power of confirmation. It is how to manage those issues that are the challenges. There will be many like that in the Ninth Assembly. The question is how the executive and the legislators will work together and find a solution. It is how the relationship between the two arms of government.

“There is also a wrong perception that the leadership of the Senate has those powers. The powers of the presiding officers are in the members. It is the members that decide the leadership of the National Assembly. Most of the decisions especially confirmation, are usually taken by the members. In other countries, the executive there are seen to be lobbying the legislators. When they have a candidate, they will go and lobby to get in their preferred choice appointed.”

Senate Leader Ahmad Lawan said: “We are reaching out to all our colleagues, regardless of their political persuasions. After all, we are supposed to work together. It is not just going to be a Senate for only the APC members. It is a Senate that will consist of the APC, PDP and YPP. Therefore, we need everybody to support the genuine and laudable course of making Nigeria better.

“I will ensure that our administration is able to deliver laudable projects for Nigerians and the best way to achieve this is for all of us to work together.”