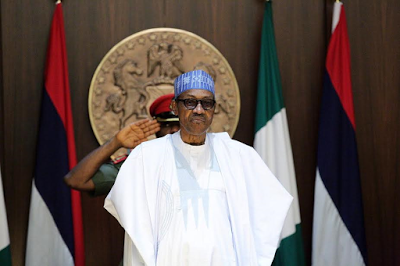 The President, Muhammadu Buhari, has urged the Nigeria Army to do more in intelligence gathering and synergy with other security agencies in order to tame terrorism and other forms of insecurity bedevilling the country.

According to him, the war against terrorism is intelligence-driven, saying that the army needed to gather information and process them into actionable intelligence for the conduct of their operations.

Buhari said this at the Chief of Army Staff Annual Conference in Abuja on Monday.

The president who was represented by the Chief of Defence Staff, General Lucky Irabor, however, urged the Nigerian Army to remain apolitical.

He said, “The war against terrorism and insurgency is intelligence-driven. It requires the gathering of information and processing them into timely and actionable intelligence for the conduct of operations.

“It also means synergy of efforts and collaboration amongst all the security agencies. I, therefore, charge you to do more, in your information gathering efforts and the level of synergy amongst intelligence outfits in order to comprehensively defeat all forms of insurgency and terrorism in our country within the shortest possible time.

“While performing your constitutional roles, I urge you to remain apolitical and continue to operate within the framework of the principles of fundamental human rights and the laws of armed conflict.”

He added that while some equipment procured are now being delivered, others would arrive within the shortest possible time.

The Chief of Army Staff, Lt Gen Farouk Yahaya, said the lack of the needed vehicles and weapons for the operations affected the morale of the troops.

He said, “The dearth of requisite vehicles and weapon platforms to provide the needed support for operations has a negative impact on the morale of troops.

“To this end, I directed the Command Engineering Depot and Nigerian Army Special Vehicle Plant in conjunction with the NAEME and other stakeholders to look inwards and see how best these challenges could be tackled.

“Consequently, within available resources, a total of 10 AFVs, 37 B vehicles and 777 small arms and light weapons, as well as 7 x 155mm artillery guns, were repaired, refurbished and remodified.

He, however, said the security situation in the North West and North Central which hitherto was tensed due to the increased activities of armed bandits among others is now relatively calm.