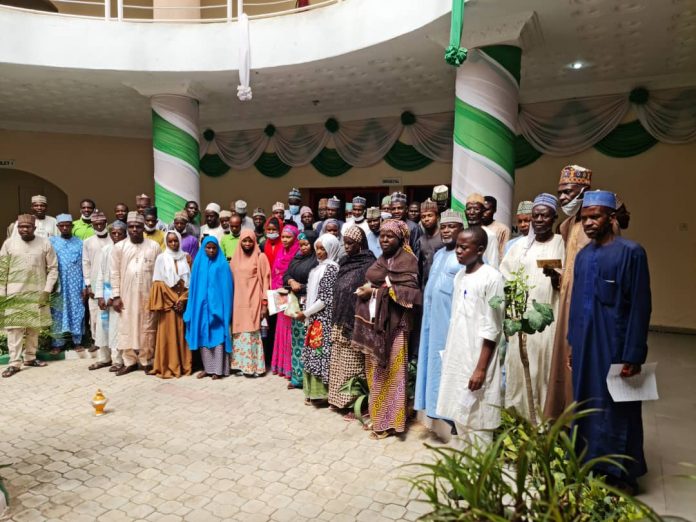 Rice farmers in Jigawa state have received a climate-smart training on system of rice intensification (SRI), a new approach to rice production that increases the crop productivity and reduces methane emissions by at least 22 per cent to a maximum of 64 per cent.

The training was part of a tripartite partnership between the Foreign and Common Wealth Development Office (FCDO) of the British Government through its intervention on investment promotion under the LINKS Project, the Jigawa state government and a leading commodity trading firm Silvex International Limited.

While delivering the training, Mr. Muhammad Adamu, an Agribusiness consultant and the CEO of a training firm Green Sahel Agric Ventures revealed that the system of rice intensification (SRI) uses a cultivation system of alternate wetting and drying that creates aerobic soil conditions that reduce the production of methane. It uses less seeds and less water, whilst increasing yields.

“As such it can increase farmer incomes whilst reducing Green House Gases (GHG) emissions. Despite the benefits of SRI having been demonstrated in over 60 countries, it has not been demonstrated at any scale in Northern Nigeria. It also utilises different techniques to the traditional norms and widespread adoption in Nigeria will require farmers to be trained in these new techniques and be convinced of the benefits” he reiterated

The two-day training of trainers for the lead farmers and field coordinators is expected to be stepped down to at least 50 farmers in each cluster of 27 communities across 9 Local Government Areas in both Kano and Jigawa to cover at least 12, 150 farmers in the two states.

Speaking at the venue of the training in Dutse, Jigawa State, the Managing Director/CEO, Silvex International Limited, Alh Abubakar Usman Karfi assured the commitment of the company in supporting farmers to move towards a sustainable means of commodity production in Nigeria.

This training and field visits indicated the commencement of the System of Rice (SRI) project anchored by the FCDO LINKS project in Kano and Jigawa States where Silvex International Limited serves as a major implementing partner.

In a side meeting at Dutse shortly after the training, Silvex International Limited and the delegation of the British FCDO/UKAID which include Mr. Chris Pycroft, the Director of Development, Mrs. Gail Warrender, Senior Economic Team Leader and other senior officials of the FCDO Nigeria have agreed to focus on Innovation, Investment and Infrastructure development in the agricultural value chains in Nigeria.

The MD/CEO, Silvex International Abubakar Karfi has on behalf of the company assured the delegation of their full commitment and more investment into the backward integration to support small holder farmers improve their income and livelihoods through providing steady access to market especially for commodities produced in an eco-friendly practice for employment and wealth creation.

You may recall that within the week, the Officials of the British government paid a courtesy visit to the Jigawa state Governor Alhaji Muhammad Badaru Abubakar where both parties renewed their commitments to promoting Agribusiness and investments. Jigawa state has in recent times intensify efforts in attracting investors within and outside the country.