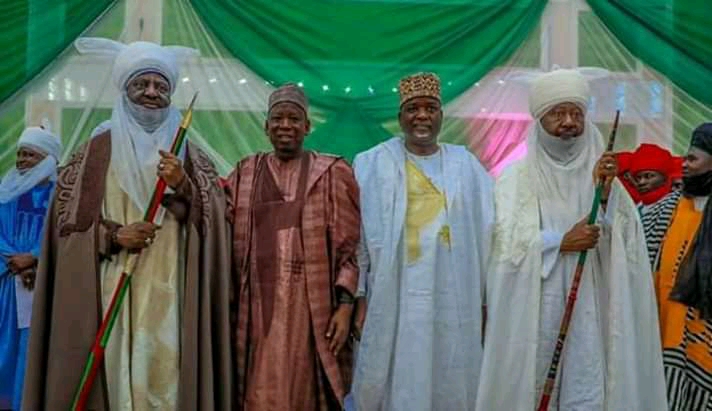 The uncle of deposed emir of Kano, Muhammad Sanusi, who doubled as senior councilor in the emirate, Abbas Sanusi (Galadiman Kano), as well as his son and state chairman of the APC, Abdullahi Abbas, were absent at the event

Messers Sanusi and Abbas, were reportedly among the contenders of the Kano throne but lost to sons of the late emir, Ado Bayero.

Newsmen on Tuesday reported the resignation of deposed Sanusi’s half brother and principal private secretary to the emir, Mujataba Abba, who also relinquished his traditional title of Falakin Kano.

However, Emirs of Rano and Karaye were in attendance, while the Emir of Gaya sent in a representative.

Igbo, Yoruba leaders along with leaders of other ethnic minorities were also there to show their support and solidarity to the new emirs.

“Here we are when two of the sons of our revered late Emir Alhaji Ado Bayero, have become First Class Emirs. Born by the same mother and the same father. This is the first time such thing is happening in the history of the state.”

He assured that all the emirs in the state would work together for the development of the state.

“It is very important to clearly understand that your main duty, as fathers, is to serve your people and humanity in general. I urge you to participate actively in government departmental projects, policies and programmes.”

Ganduje revealed that his administration took stock of developmental projects needed by all the emirates across the state.

He said he would do everything possible to see that development gets across to all nooks and crannies of the state.

“We are planning for a befitting swearing-in ceremony for our new Emirs of Kano and Bichi where we will receive people from across the nation and even from outside the country,” he said.

The two emirs assured the official of their total support, loyalty and solidarity.

The Emir of Kano said : “As Muslims we all believe in destiny. It is only Allah who ordains what will happen all the time. Allah doesn’t make mistake in all that He does. All things happen at a stipulated time destined by Him Alone.

“We must always remember our late father, the late Emir, who used to directed us to always be obedient to leaders and to also be just to people.

“He was so frequent in telling us to always be God-fearing. Your Excellency we will do everything possible to help in developing our dear state and the country in general.”

In his short remarks, the Emir of Bichi thanked Allah and appreciated the good upbringing they got from their parents.

“We will discharge this responsibility placed on our shoulders. All we need is your prayers and support. We are also assuring His Excellency of our good support and loyalty for the development of the state and the nation in general,” the monarch said.

Newsmen reported how the years-long battle of acrimony between the former emir of Kano, Sanusi and Ganduje ended when the latter relieved him of his throne and ‘banished’ him to Nasarawa State.