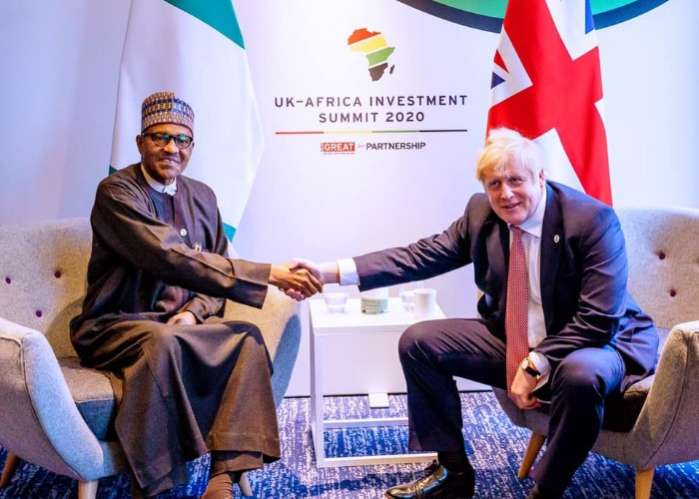 Nigeria’s President Muhammadu Buhari on Monday met with British Prime Minister, Boris Johnson, and recounted what he has been doing to reposition the nation towards the path of development.

The president reeled out gains in different areas of his administration.

The two leaders met on the sidelines of the UK-Africa Investment Summit 2020, in London, and President Buhari told P.M Johnson of strides in agriculture, leading almost to self-sufficiency in rice and other grains, saving the country billions in foreign exchange, which are now deployed to other areas of development.

On the war against insurgency, the President said things were a lot better, with the disabuse of the minds of the people on the true philosophy of Boko Haram, and the main challenge being in the area of resettling displaced people, which is being tackled frontally.

“We have a long history with the British military, and we are collaborating,” President Buhari added.

On the anti-corruption war, the President said though it was slow but painstaking, the cooperation of the National Crime Agency of UK was still needed, particularly in the investigation of fugitives from Nigeria finding accommodation in the United Kingdom.

Climate change, President Buhari said, was a challenge to Nigeria and neighbouring African countries, especially with the shrinkage of the Lake Chad to a minuscule of its original size.

The Nigerian Leader also said the country was focused and making progress on education, particularly that of the girl child.

P.M Johnson thanked President Buhari for being a regional leader who gives strong encouragement to the West, congratulating him on jobs being created through agriculture, and urging him to do more.

He equally lauded the Nigerian President for what he calls the “social and economic benefits” that have accrued to the country since he emerged, and that the necessary hand of fellowship would be extended on the war against corruption, through the National Crime Agency.

The British P.M pledged to cooperate with Nigeria and other African countries in the inter-basin water transfer, which could solve the Lake Chad problem, and enhance security in the sub-region.

On the Commonwealth Free Trade Area, being espoused by President Buhari, the Prime Minister applauded the idea, and pledged a careful consideration.

He charged the Nigerian Leader to keep the national autonomy of his country intact, noting that in the future, Nigeria would not just be a continental but international power.