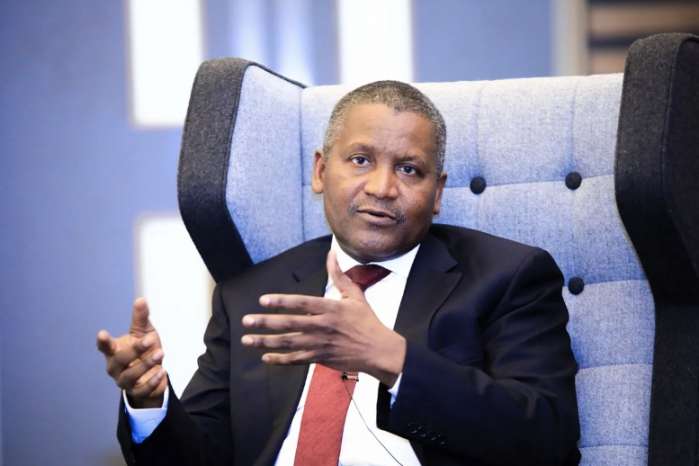 The President/Chief Executive of Dangote Industries Limited, Alhaji Aliko Dangote, yesterday said the company would increase its revenue base from $4 billion to $30 billion by 2021.

Dangote disclosed this when the Minister of Finance, Budget and National Planning, Zainab Ahmed, paid a working visit to the Dangote Refinery, Petrochemicals and Fertiliser projects in Ibeju Lekki, Lagos on Sunday.

This was even as the Federal Government assured it would continue to support the company by providing it with waivers needed to bring in equipment as it moves from one stage of the project to another.

Dangote said what the company was doing at the moment is building capacity and foundation of the Group from $4 billion of revenue to $30 billion.

To raise the $26 billion revenue target, he said the company is looking at over one million tonnes of rice, 600,000 tonnes of locally made sugar and eight million tonnes of cement export by January 2020 from the facility to other African countries to generate.

He said all these plans are aimed at turning around the company while making Dangote a major supplier of foreign exchange for the domestic market through the Central Bank of Nigeria (CBN).

In her remarks, Ahmed said the Federal Government is proud of the efforts of Dangote Industries because upon completion of the refinery, it would help the country earn more foreign exchange.

‘‘This is a very important project. This is a project that is one of its kind and one of the largest single train refineries in the world today. It also has collocated with petrochemical plant, fertiliser plant as well as a gas plant.

Mr. President is very proud of this project and we also speak about it everywhere we go. The number of jobs which it is creating and also the good that it will be bringing to our economy is enormous. We can already see the economic benefits and activities around where the project is located.’’

The Minister said she is elated that Engineering Procurement Contractor is also the project management contractor, and that is conserving resources and also keeping a lot of the specialisation and the skills in Nigeria.

By this project, we have a lot of specialists that have come here. As this project is going on, our youths are being employed and they are trained, ready to learn from the experts around them; they are being deployed to various refineries across the world to get first hand experience of working in the refinery even before it is completed.

The Minister assured Dangote that like it was in the past, the Federal Government will continue to support the company to provide it with some clearances required to bring in equipment and they move from one step of the project to another.

In the Ministry of Finance, Budget and National Planning, we have had the opportunity to interface with your company at different times. I used to be alarmed at some of the size of the requests that come but now that I am here physically, I do understand that this is very big and it is very important for this country.

I hope that as the refinery takes off, you will continue to look at how you can leverage on other businesses that we will be create multiplier effects on the economy.

The cement business you have done is known globally. You have done exceedingly well; you have created economies in other countries other than just Nigeria, but this is the first of its kind and we are glad that you took the decision to build here.

When this is completed, we will not be importing refined petroleum products, we will just be buying from down town Ibeju Lekki, and then be looking at the logistics of how to distribute it across the country, hopefully, either by rail as well as by sea.

And for us in government, that is a savings of at least $10 billion that will be sitting in our reserves instead of flying out to pay for petrol. What that will do is send our macro-economic environment, which in turn will encourage more investors to come in and do investments like the one you are doing.’’