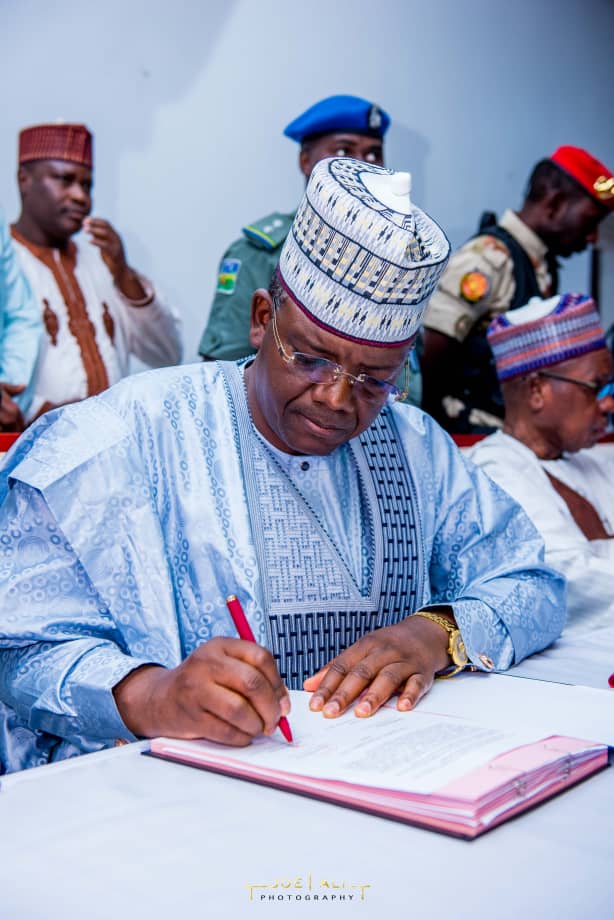 His Excellency,Zamfara State Executive Governor Hon Dr. Bello Mohammed MON (Matawallen Maradun)has expressed happiness and satisfaction with the performance of the state’s candidates in the 2019 SSCE as was released recently.

The Governor expressed his happiness and gratitude for the good performance of the state indigenes that participated in this year’s SSCE examinations when the Secretary to the Zamfara State Government, Alhaji Bala Bello Maru and the Permanent Secretary Ministry of Education, Alhaji Sanusi Mode presented the state’s performance record to him at the Government House, Gusau.

The performance record indicates that out of the 29,855 that sat for the examination from the state, a total of 22,456 candidates met the prerequisites requirement for admission into tertiary institutions of 5 credits including English and Mathematics.

This year’s score represents 75.21 percent of the total number of candidates that sat for the examination in the State and is the first time the State recorded such a huge success.

The Governor reiterated his administration’s resolve to prioritise the Education sector at all levels as he has been exhibiting since the inception of his government.

He also advised parents in the State to encourage their wards to seek for both Islamic and western knowledge for the purpose of becoming useful citizens and developing Zamfara.

He further restated his stand to continue to pay all the examinations fees to indigene students at Government schools as at when due in order to give them the opportunity of continuing with their studies at the tertiary level.

It could be recalled that when Governor Matawalle took over the leadership of the state, he met a huge liability of examinations fees to the tune of over 1.8 billion Naira which he instantly effected payments for the purpose of releasing the results of the candidates especially the children of the poor who suffered stagnation in their educational pursuit.

Even recently, the governor made an advanced payment of N200 million examinations fees to the National Examinations Council (NECO).

This is the first time Zamfara State recorded a good examinations scores since its creation as a state in 1996 because the previous records show that the scores ranged between 40-50 percent it even went as low as 30 percent.