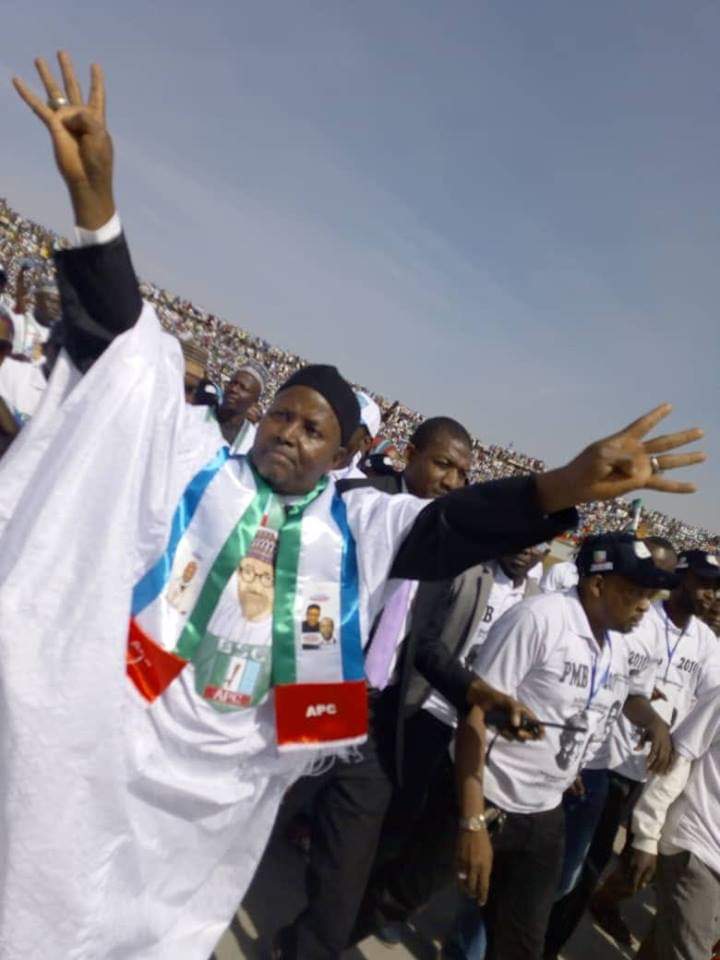 Today, Monday the 21st of January, 2019 is a day we will not forget, indeed it is very sad for us receiving the news that Dr Ab Baffa the Executive Secretary of tetfund was relieved of his National assignment in the tetfund. Yes, we are sad because I can say we were not really expecting it now that we are busy working for the reelection of Mr President 2nd term bid. So I must say we received the news with shock, but being Muslims, we all knew that every beginning must one day has an ending, we take solace that the Allah that gave Dr Ab Baffa the seat has reason for taking it away and giving it back to Prof Elias Suleiman now. And as Muslims we cannot question Allah’s decision, and so also because we always pray to Almighty Allah to give us the best, do us the best and give us the strength of iman to accept what He destined for us. And alhamdulillahi, we pronounced Innalillahi wa inna ilayhirrajiun, Allah will surely substitute something better for us in Dr Baffa.

Dr Baffa stayed as ES tetfund for a little over two years now, and I will say without mixing words that his years in that organization can be said to be a great success, both within and outside the organization. I am not a staff of the tetfund, so I cannot say much on that, but what is visible to the eyes I can say he has achieved a lot in his short stay. It is said that, it is not how long you stayed, but how well you make your presence felt during your stay.

Dr Baffa may not have stayed for long in the tetfund, but I am certain he has left indelible mark in that Organization which will take long time to erase. It is always natural to love, like, dislike and even hate a person, more especially when he is occupying a certain position that made him to become inevitably visible, and depending on which side one falls. So also depending on which side one belongs, one can be sad or happy if that person is no longer visible, it is a choice between big hearts and small ones, because only Allah that makes a person to be visible one time and not visible another time. May Almighty Allah always give us the big hearts to accept His decision no matter how hash it may be.

I took time to write what I wrote above because when the news filtered in today, it became the subject of discussion in the media. It really tells so many things, some people are even jubilating that the popular Dr Baffa of #One2Tell10 has been relieved of his appointment, I could not really understand why they are jubilating, because the rationale behind the jubilation is what I could not really decode. All the same, one cannot stop people from feeling what they are feeling and expressing what they feel, but the questions I have been asking myself are, what is their benefit of relieving Ab Baffa from his seat? And now, that he is not there, will Prof Elias Suleiman Bagoro be doing it the way they want it done?

Yes, Dr Ab Baffa FROM KANO, A DIEHARD BUHARIST IS RELIEVED FROM TETFUND AND PROF ELIAS SULEIMAN BAGORO FROM BAUCHI A KNOWN PDP APOLOGIST IS REAPPOINTED, HOW WILL THAT BENEFIT THE PEOPLE OF KANO THAT ARE REJOICING WITH THE ACTION OF THE MINISTER?

May be if the answers of the above questions are gotten, we may have cause to also rejoice with them or otherwise. But unless that is done, I think it is shear foolishness or envy to be REJOICING for what is removed from Kano and taken to the Minority from the opposition party in Bauchi. You have to think otherwise, but you must check yourself thoroughly as to why you are happy or otherwise, when you are truly convinced that you are right, so be it.

Let me for the benefits of records keeping itemized some of the few achievements that Dr Ab Baffa brought to Kano alone:

I would also like to say, even though he may not like it, that Dr Ab Baffa has touched so many lives in these his two or three years in tetfund.

In the field of the Buhari reelection bid, I can beat my chest to say Dr Ab Baffa is almost the only Buhari’s political appointee that became conspicuously visible in campaigning for the reelection of PMB from the North. He single handedly formed the #One2Tell Buhari Support Group that has structure from National down to the polling units in all the 19 Northern States of Nigeria, working for 19 million additional Votes for PMB in this 2019 presidential election inshaa Allah. He took the risk against all odds. And MAY BE HE IS PAYING FOR THAT RISK HE TOOK!

This single venture that he took upon himself to what one will say repaying good with good was what set him against other Presidential appointees and even elected individuals, including the Governor of his State. There is so much to say, but I will put a pause here until some other time.

But Let me state here what I said earlier that, Dr Ab Baffa has touched and is still touching so many lives, and we will collectively pray and work tirelessly for the reelection bid of President Muhammadu Buhari in this coming February elections, and we will also do same for all our enemies.

May Almighty Allah always guide our thoughts and actions, Amin ya rabbi.