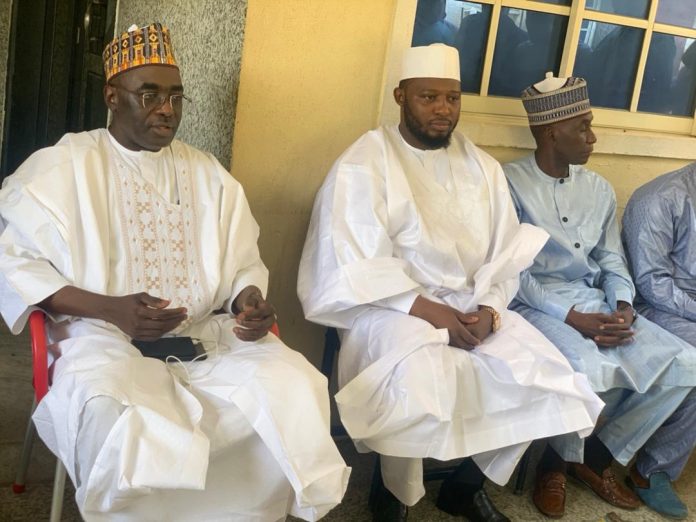 The presidential aspiration of Former Vice President, Alhaji Atiku Abubakar has by all indication achieved another giant stride, as Dr Yunusa Adamu Dangwani, one of the aspirants of Kano governorship seat under PDP, received Director General of Atiku Support Organization ASO, Abubakar Kabir Abubakar Babawo, and his team of different Atiku Support Groups on a Sallah visit.

Arriving at Dangwani’s personal resident on Saturday, Alhaji Babawo said they were at his resident to pay him Sallah homage, and to intimate him on the activities of Atiku Support Organization since its inception in 2019 as well as to seek his support for Atiku Abubakar’s ambition of becoming Nigeria’s elected president in 2023.

Alhaji Babawo told Dangwani that his success could mathematically be directly proportional to Waziri of Adamawa’s victory in the forthcoming elections, adding that ASO will in return render him the support he needs to become Kano’s next governor.

“We have never visited any politician in Kano or anywhere, because our main business is to promote His Excellency Alhaji Atiku Abubakar across the federation – and he is the only person we know. But considering your love for Waziri and the good plans you have for Kano people; we decided to appear before you today – and I think this must be tagged as a memorable event. I will assure you that from this moment onward, you are ASO’s and ASO is yours.”

“The disheartening situations of insecurity, deficiency in social well-being among other catastrophe and fiasco this administration of President Buhari is causing, must be put to end…and Atiku Abubakar is the only person that can salvage this country.”

The DG expressed optimism that Atiku Abubakar will eventually become the leader that every Nigerian desire and prayed for, considering his excellent commitments to bring this country back on track, “and with Dangwani as governor in Kano state, things will be better.” he added.

In his remarks, Dr Yunusa Adamu Dangwani said amongst all the 2023 presidential aspirants that are vying for the position under PDP, Atiku Abubakar remained the only politician whose good plans shows how prepared he is to lead the country out of the woods.

“I am elated to have seen that you’re all youths in this movement, and this guarantees that you’re capable of not only selling Atiku Abubakar across the country; but also making him to be the president of this country, being the person who knows Nigeria’s problems more than every aspirant.”

Dangwani, who congratulated Abubakar Kabir Babawo for emerging as the Director General of Atiku Support Organization, said his aspiration to clinch power in Kano was to save the state from the hands of incapacitated leaders and bring back its lost glory in terms of business and other human development.

He assured Babawo and his entourage of his complete support for Atiku Abubakar ahead of 2023 general elections, saying that “we will work hard collectively to save Nigeria and Kano from the mess these administrations have plunged them into, through voting for Atiku Abubakar – because I have being an ardent supporter of Atiku Abubakar for years.”