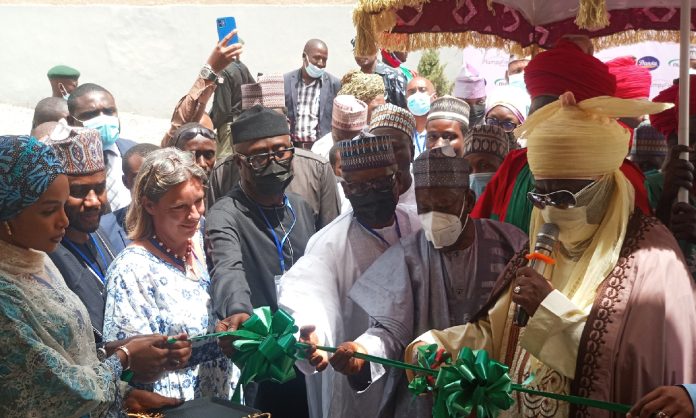 The event which took place on Tuesday 8th March 2022 was honored by high dignitaries from within and outside the country; His Excellency the Governor of Kano State Dr. Abdullahi Umar Ganduje, Honorable Minister of Trade and Industry, The President Dangote Group, Alh Aliko Dangote, French Ambassador to Nigeria, His Royal Highness Emir of Kano Alh. Aminu Ado Bayero were among the witness to the event.

In her opening remark, Mrs Aziza Sani Dangote who is the founder of the factory expresses her delight for having the event on the International Women’s Day; she mentioned the history about how the factory came to being after she tries so much in convincing her father Late Sani Dangote to see to her dream of tackling malnutrition in Nigeria; she added that the company specializes in manufacturing nutritional food used for the care of children affected by malnutrition. Also Nutri K supplies humanitarian and health programmes with high quality ready-to-use therapeutic and supplementary food (RUTF, RUSF), as well as lipid-based nutrient supplements (LNS). She ended by praying for the gentle soul of her father to rest in peace.

The president Dangote Group, Alh Aliko Dangote appreciates the guest for finding time to come to witness the event he commends the board for coming up with the idea that would revolutionized the fight against malnutrition in Nigeria and Africa in general. He recalled the time when his late brother informed him of his idea of having the factory and now that is dream is fulfilled he is no more with us, may his soul rest in peace. He added that production of RUF in Nigeria is very important to Dangote Foundation as it is one of the requirement for achieving strategic its goal which is to reduce the number of life loss to malnutrition and disease. He concluded that Aliko Dangote foundation pledged to enter into partnership with states government, local governments and local producers of RUTF in order to guarantee adequate supply to primary healthcare centers.

Dr. Abdullahi Umar Ganduje, the executive governor of Kano State applauds the efforts made in realizing this dream of their late friend Alh. Sani Dangote; he urged that we need to take the advantage of the high population of Kano State and came up with ideas to develop the state. He added that Kano state government is ready to partner with anybody to fight malnutrition. He further directed all the 44 Local Government Chairmen in the State to purchase Two Million Naira worth of RUTF product for free distribution to villages.

The Honorable Minister of Trade and Industry, The French Ambassador to Nigeria, The Emir of Kano and the Representative of UNICEF all delivered their goodwill messages at the event. The Emir of Kano, Alh. Aminu Ado Bayero cut the tape and declares the factory open, thereafter the president Dangote Group, Alh. Aliko Dangote lead the guest to a tour round the factory.