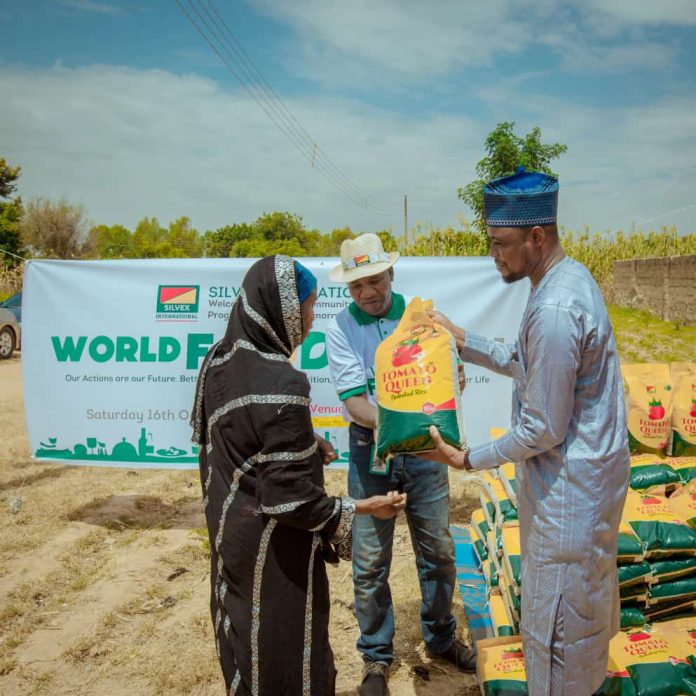 No fewer than 100 households in Yanoko community of Tofa Local Government area of Kano state have on Saturday benefited from rice distribution by Silvex International, an agri-business company in the state.

Each of the beneficiaries was given a bag of rice as palliative to help cushion the effect of the looming food crisis as a result of drought experienced in some parts of the country.

Speaking during the distribution, the Managing Director of the company, Abubakar Usman Karfi, said the event was also organised to also sensitise farmers in the community in commemoration of this year’s World Food Day.

According to him, “One of the objectives of this event is to create awareness on issues around hunger, poverty and wealth creation, especially in rural communities.

“But, this year’s event centres around climate issues because of its significance to people globally. The most important thing is to create awareness among people on the imminent threat of climate change that is threatening food production and security worldwide.

Karfi said the intervention is part of the company’s corporate social responsibility to the communities under its jurisdiction.

Also speaking, a climate change expert with Bayero University Kano Centre for Dryland Agriculture (CDA), Dr Murtala Badamasi, said farmers need to be educated on the reality of climate change, especially with the sudden halt in rainfall this year, which he said projects the likely food crisis in some part of the country.

He advised farmers to adopt early growth crops, eat food with nutritional value as well as go back to their farms for dry season farming immediately.

Responding on behalf of the people of the community, representative of the Village Head, Mustapha Muhammad thanked the donors for the kind gesture and promised to put into practice what they were sensitised on.