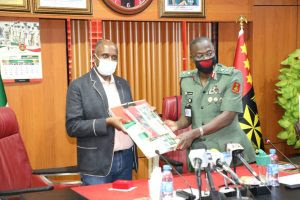 Minister of Transportation Chibuike Amaechi has called on the Nigerian Army to provide security protection for the workers on Kaduna-Kano, Kano-Maradi and Maiduguri-Port Harcourt rail lines projects that will begin soon.

Amaechi made the call when he visited the Chief of Army Staff, Maj.-Gen. Farouk Yahaya on a courtesy call on Friday in Abuja.

He said that the Kaduna-Kano rail line project was billed to start later this month while works on Kano-Maradi and Maiduguri-Port Harcourt lines would begin in July.

He said the request became necessary due to the security challenges facing the country.

According to him, the work on the Kaduna-Kano rail line will start this week and there are Nigerians and Chinese that will be working on the project and we need a security presence.

The minister further revealed that some railway projects would be channelled through military establishments particularly the rail track linking Kaduna and Kano which was designed to pass through the Nigerian Defence Academy (NDA).

He said that if the military would allow the ministry to access such areas, it would greatly reduce the construction costs and enhance the development of the barracks environment.

Responding, the COAS, Maj.-Gen. Yahaya, commended the minister for the visit, adding that it would provide an avenue for the army and other agencies of government to deliberate on issues of national development.

Yahaya assured the minister of the readiness of the Nigerian army to provide the needed support for the successful execution of the rail projects across the country.

He said that the Nigerian Army would stand with any programme or project that would enhance national development and improves the welfare of the citizenry.

According to him, a good rail system will also be beneficial to the military.

“It is pleasing to note what you have been able to do in the rail sector, especially the Abuja-Kaduna and Lagos-Ibadan lines among others.

“We are willing and ready to provide the security required to ensure the safety of the workers on the projects,” he said.