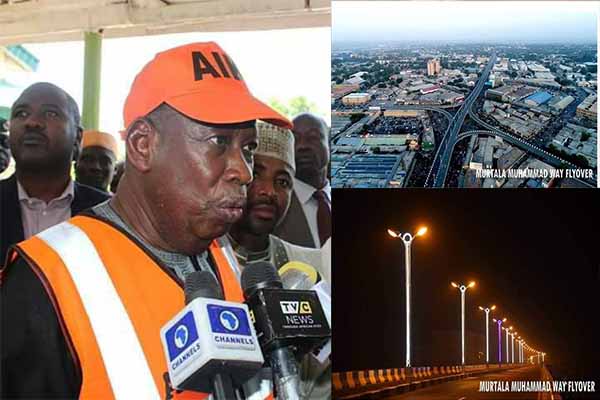 Even at the peaked of tussle between a former governor of the state, Senator Rabiu Musa Kwankwas and the incumbent, Governor Ganduje has remained) focussed on delivering democracy dividends to (the people of Kano State.

Almost six years out of power, still they presumed to be undefeatable power broker in the state. For them they can do and undo; they can make or mar; they can give power to whomsoever they wish and wrest power from whomsoever they wish. Still they have not realised that the movement crumbling like a pack of cards and the domino effect still extends to remaining Kwankwaso’s supporters.

They hurriedly forget that when their leader was at the helm of the affairs of the state, there was a relative retardation in commercial activities for which Kano is well-known. One funny and laughable thing the movement has now turned itself into the so-called defender of public properties.

While Kwankwaso was in power deluded by his rise to political limelight and his rabid followers do not help matters as they have spun a myth around him that he wears shoes made of metal and he could tread on the toes of all – the mighty and the not-so-mighty.

No one in the state immune from his sharp tongue, this is not to count the ordinary citizens, civil servants and pensioners who also suffered varied indignity treatments. Is he not the same Kwankwaso in whose second tenure he borrowed billions from State Pension Fund to build Bandirawo and Amana Housing Estates? Still most of houses are not occupied by the peoples in whose name the estates were constructed. Now only ample of Government Department and Agencies are occupying these houses.

Let them woke up from their slumber and recall that it was under the former governor that Daula Hotel was closed down and the staff sacked. Even though RMK handed over the property to School of Hospitality and Tourism but the school only occupies 10 per cent of the structure situated within premises.
Unknown to the people of the state at that time when the hotel was closed down in spite some reputable hoteliers operators drawn the attention of then administration to entered an agreement with them to managed Daula Hotel under Public Private Partnership (PPP) (but not heeded they request to runs the Hotel on PPP agreement only the reason for rejected this Hotelier request best known to him.

Now Ganduje’s administration has engaged private developer through Public Private Partnership (PPP) to developed the said property into a residential building, a mall and a hotel in its continued efforts to explore more ways of enhanced revenue generation in the state.

The present administration work assiduously in seeing to the actualization of the bringing back to life of the (Triumph Newspaper.) Governor Ganduje shows his commitment in revitalisation of the Triumph Publishing company knowing that the company is not just a newspaper publishing company but a training ground for journalists across the country.

Around October 2012, we the staff of the company on Thursday at about (6pm) going about our normal duty just saw (a) team of security operatives in the premises of the company accompanied with then state commissioner of information. They told us that Governor RMK closed down Triumph Publishing Company.

This brutally and unceremoniously closure of the company would remain in our mind even though (we) the staff of the newspaper are more luckiest than their Daula counterparts as no one was sacked from service courtesy of solidarity we enjoined from our comrade in pens in the state.

I can testifying that Triumph Publishing Company is relocated to a convenient place befitting a newspaper house to pave the way for the development of a more economically viable and modern Bureau de Change Market that can generate more revenue to the state and provide employment opportunities to the teeming populace.

On Zoological Garden, no government will fold its arm and watch the lives of its citizens (being endanged). One may recalled last year how one of the Lions kept in the Zoological Garden escaped which cause serious trauma to the residents around Gandun, Tukuntawa and Zoo Road Housing Estates.

On the Eid ground, for the residence of Fagge, Zango, Kofar Mata, Kofar Wambai the Eid Ground remains scary place to passed by because some miscreants turn the ground as a hiding place and commit henours crimes by passers a lot of peoples lost lives to phone snatching and other related crime. They have forgotten that it was during his first tenure some part kofar Mata Eid ground were allocated to some individual close to then administration. With the structures put in place surroundings the Eid ground the level of insecurity drastically reduced and beautifying the area.

Civil servants and their families would not forgotten how Governor Kwankwaso sold Government GPs at the exorbitant price beyond civil servants that occupied the said properties earning, while there are available records on how his government sold such GPs to to cronies of the administration at giveaway price.
At the tail end of the administration, some vehicles belonging to the state government valued millions of naira sold to themselves at giveaway price.
Another laughable act by Kwankwasiyya movement is that it said it would not fold its arms and allow public assets to rot away.

But its part of the state government policies that there haven’t been any of these issues that hasn’t been discussed and looked into by the Kano State Executive Council; sometimes with the inputs of professionals before a final decision is taken. So as far these decisions are concerned, they are not illegal, and they have been done with due consultations with relevant stakeholders.

Despite the financial difficulty the country and the state at large facing, Governor Abdullahi Umar Ganduje is doing very well for the overall development of the state and has taken the state to the highest feats where he made free and compulsory education for teaming children most of whom are wards of the poor.

There is nothing wrong if such comatose and structurally defective properties would be turned around with committed stakeholders through Public Private Partnership agreement with willing investors in the best public interest, as part of a noble futuristic move to make the ancient city catch up with modernity for a befitting mega city status.

Dukawa wrote in from Kano