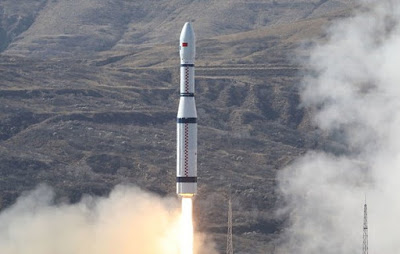 China has successfully launched the “world’s first 6G satellite” into space to test the technology.

The technology, predicted to be over 100 times faster than 5G, was launched into space alongside 12 other satellites onboard a Long March 6 carrier rocket.

It is also said to carry an optical remote sensing system that can monitor for crop disasters, prevent flooding and forest fires.

The technology, which would be used to ascertain the performance of the 6G frequency band in space, was named after the University of Electronic Science and Technology of China (UESTC).

The institution, which dubbed itself “China’s cradle for the national electronic industry”, took to its Twitter page to also confirm the development.

“The “#UESTC” satellite (Star Era-12), the first #6G test satellite in the world and first one named after the university since its establishment, was successfully lifted off at Taiyuan Satellite Launch Center and entered the scheduled orbit on the morning of Nov. 6,” it wrote.

The project comes at a time when the dust generated by the introduction of 5G network — over several conspiracy theories — is yet to die down in countries like Nigeria.

The Nigerian Communications Commission (NCC) had in May announced that 5G network has not been deployed in the country contrary to speculations.