AS PMB SHUN NIGERIANS CALLS OVER SERVICE CHIEFS OVER STAY 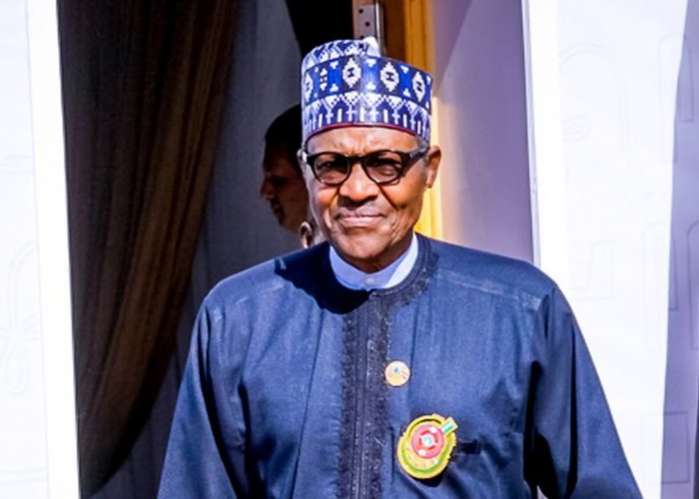 This is the relationship between the People of Nigeria and Government as stated in Section 14(2)(b) namely, that: “The security and welfare of the people shall be the primary purpose of government”.

GMB as he was then as presidential candidates of APC said if you nominate me in December, 2014 and elect me in February 2015, my administration will urgently secure the territorial integrity of the nation. I will never leave the defence of the nation in the hands of Hunters, Children, and Civilian JTF. He Promise Nigerians that his administration will address capacity building mechanisms of law enforcement agents in terms of quantity and quality as this is critical in safeguarding the sanctity of lives and property and establish a well trained, adequately equipped and goals driven Serious Crime Squad to combat insurgencies, kidnapping, armed robbery, ethno-religious and communal clashes, nationwide.

There is nobody in Nigeria that is not aware of what is going on. Each passing days Nigerians were hearing of various attack perpetrated by insurgents and bandits causing so much bloodshed across the federation while our security agencies have not succeeded in improving the security situation. Peoples may recalled that at early stage of the administration military chiefs boldly declared that Baki Haram has been technically defeated the defeat not last long as “technical victory”, it is apparent, is fast becoming a Pyrrhic victory with the renewed wave of attacks by the insurgents on soft targets.

The national security architecture has some lapses that have yet to be corrected by the government. In particular, each security agency works in a silo, we are not seeing the kind of synergy that can produce the results that we desire. To that extent, they has not being achieve desire goals on they promises in securing the nation and the reality on the ground is that people are dying at the rate that is not acceptable. Indeed they continued stay of the service chiefs has stagnated upward mobility of officers which have seriously impacted morale negatively. President attitudes of not heed poor Nigerians crying not helping matters but he can’t alone cannot solve these security problems despite his military experience either his security chiefs but all Nigerians must be listens and contribute toward secure the nation

We have heard how his counterpart presidents of Mali, Burkina Faso, Chad and the Niger Republic leaders acted when terrorist attack on military base they acted quickly by fired the country’s top security chiefs this sent a strong massage to their citizens that as a leaders they handling of security crisis in their respectively countries with utmost cares not letting to be surprise. Ideally when such incidents occurred usually necessitate the replacement of service chiefs under whose leadership witness repeat assaults and losses of lives of troops in the hands of terrorists. But our service chiefs have run out of ideas having tried their best possible” in the last five years.

In spite our service chiefs have overstayed whereas their staying in position has put massive pressure on upward mobility within the military high command. For years that the current military leadership has reached they limits and new ones should be tried but the President has been steadfast in support of them and there is need for fresh hands to pilot the affairs of Nigeria military for better results.

Even though he expressed his surprise but Nigerians don’t think PMB will be happy seeing escalations of insecurity across the federation by large extensions his administration failure in its primary responsibility of securing lives and property. Its unimaginable Nigerians to heard that the president is surprising while poor Nigerians are at the mercy of criminal impunity. Nigerians and other security stakeholders would like to see the change of service chiefs in the wake of the growing insecurity in the country.
.
Despite leadership of National Assembly leadership always remain loyal and allows in anything to go by forwarded to them by PMB but this time they heeded poor peoples crying over insecurity which both two national assembly chambers unanimous called for the sack of the service chiefs on that very day when the Nass made the passed vote of no confidence passed on the service chiefs. Mr president had an meeting with them on the same day as a signs of vote of confidence on the service chiefs. This act of courage by them is an indictment of the Government failure but instant to do the needful he have an usual meeting with them as a signs of vote of confidence pass on them by Mr president on security service chiefs. National assembly leadership now realise People are dying daily, others are being maimed.

To be honest Mr President has achieved what he has achieved, to another extent, he didn’t achieve what is expected of him. He performed where he could perform and he failed where he failed. No single individual can give a total solution to the security problem in the country. He has tried what he can to some extent but in some aspects he and his service chiefs can see that there is deterioration of the security – it has taken another dimension. So, PMB cannot say he has fulfilled or either technically defeated or he has failed.

Indeed the continuing over stay of the service chiefs has stagnated upward mobility of officers which have seriously impacted morale negatively. The retention of the chiefs stagnates the careers of other senior officers and induces unfair early mature retirements, in the absence of vacancies at the topmost echelons of the services.

Clearly, the President believes that security has been improving steadily since he came to power hence his surprise at those who are saying security is deteriorating. In particular, the fact that each security agency works in a silo, we are not seeing the kind of synergy that can produce the results that we desire except technically defeat of Boko Haram claimed by the Buhari’s administration. For anyone in a position of power need to improve governance, need to develop access to multiple sources of information.

But in Nigeria the case is reverse because those close to corridor of power are either misleading the president or arrogating himself with know all or those that have guts to voice out generality pain they have been told are enemies by handlers. To Mr President as a commander of chief , service chiefs is like have run out of ideas having tried their best possible n the last five years. Additionally, it will be suicidal for the nation, as well as it a clear failure of leadership on the part of the service chiefs acted like our military are not qualified to depend the country.

Security issue is not like just try-your-luck, you try this and you succeed fine, you try that and you don’t succeed, you change tactics in fighting militants other security breach. Dealing with militancy and other challenges because it is not like just a war between a nation and another nation where you see your enemy and your enemy sees you, but these are different things all together. Securing the nation is not a matter for the Federal Government alone, it requires the inputs of all stakeholders because security is everybody’s business. To that extent he has not being achieve much on his promise to secure the nation and the reality on the ground is that people are dying at the rate that is not acceptable.

. In 2015 over 15 millions Nigerians viewed PMB as a liberator of oppressed and depraved Nigerians. A Messiah to the nation’s bedeviling countless socioeconomic and security challenge with expectations that PMB had enough experience in governance. Electorates banked on him but to the utmost surprise of Nigerians expected that he will demonstrate more flexibility in handily country socioeconomic and security challenge but president Buhari’s rigid leadership style has made the country’s problems harder to solve. Because he is not listens to popular views on issues of important matters like 15 million vote of electorates not matter to him. He promised Nigerians that his administration will give our military adequate and modern arms and ammunition to work with and will improve intelligence- gathering and border patrols. Nigeria will return to its stabilising role in west Africa and no inch of Nigerian territory will ever be lost to the enemy because we will pay attention to the welfare of our soldiers in and out of service.

There is need for fresh hands to pilot the affairs of Nigeria military for better results. each security agency works in a silo, we are not seeing the kind of synergy that can produce the results that we desire. To that extent, much they has not being achieve on they promise to secure the nation and the reality on the ground is that people are dying at the rate that is not acceptable. Its seem that President Buhari has a problem of trust. His philosophy is that of ‘the devil you know is better than the saint you don’t know. President Buhari’s inability to listen to voice of reason and retire the security chiefs has not helped matters, as the development has contributed to the stagnation of the career of military personnel besides the obvious fact that their morale in professional duties had been dampened

President Muhammadu Buhari can’t alone solve this security problems despite his military experience either his security chiefs but all Nigerians must be listens and contribute toward secure the nation. the security and welfare of the people shall be the primary purpose of government this is the relationship between the people of Nigeria and government as stated in section 14(2)(b).

Dukawa a Public Affairs commentator. can be reached at abbahydukawa@gmail.com