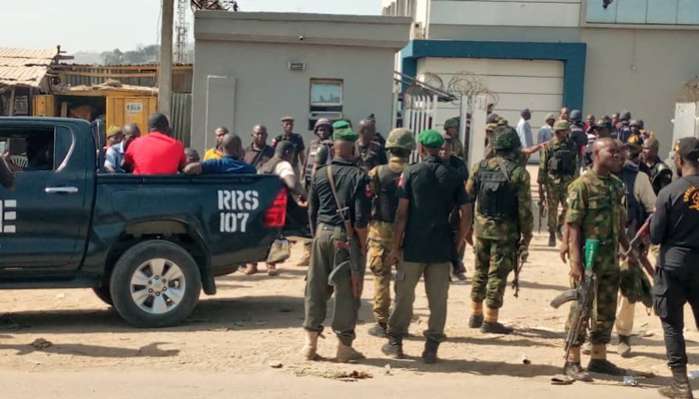 An attempt to raid an old generation bank in Mpape area of the Federal Capital Territory, Abuja by dare-devil robbers in alleged connivance with some of the bank’s staff and security men was foiled by Policemen and soldiers from the Guards Brigade.

One of the armed robbers was killed during a gun duel with security operatives, while four others were arrested after they were smoked out of the banking hall with tear gas.

Also held by the Police from Mpape Division for questioning were some staff and the bank’s security men, who were suspected to have aided the bandits’ entrance into the banking hall.

It was curious how they gained access into the bank on a Saturday when the bank was closed without any resistance or firing a shot.

According to eyewitnesses the robbers gained access into the bank without any kind of resistance and were almost making away with their loot when a bank customer who was using the Automated Teller Machine (ATM), noticed suspicious movements and alerted a senior staff of the bank who in turn called the Police.

Meanwhile, it was like a scene from an action movie as dozens of armed policemen and soldiers surrounded the bank located along Mpape Road opposite Crushed Rock Field, waiting for the armed robbers who were trapped inside the bank.

The robbers noticing that they were completely surrounded by soldiers and Policemen, remained holed up in the bank for about six hours before they were smoked out with tear gas and arrested at about 3.pm.

One of the robbers was however shot and killed while trying to escape.

The robbers came out at intervals and surrendered as they were picked up by security men.

The incident resulted in a heavy gridlock on the narrow road that leads to the community as huge crowd thronged the scene as the news of the robbery spread.

Four “Ghana must go” bags of cash were recovered from the robbers, it was gathered.

A statement from the FCT Command of the Nigeria Police, signed by the Deputy Public Relations Officer, Yusuf Mariam, read, “In prompt response to a distress call at Mpape , the FCT Police Command has foiled an attempted robbery attack at a First Bank branch at about 1200hrs, on Saturday.

“Police operatives were immediately deployed to the scene and engaged in crossfire with the robbers thereby foiling the attack on the bank with the back up of the Military. Consequently, Four (4) suspects were arrested and one shot dead while trying to escape.

“The Commissioner of Police has ordered a discreet investigation of the incident.

“The Command urges residents to remain calm as normalcy has been restored while reaffirming its commitment to nip crime in the bud and ensure safety in the FCT”.

Meanwhile, the FCT Commissioner of Police, Bala Ciroma, in a separate chat confirmed the incident to our correspondent.

He stated, “It is a foiled bank robbery; We stopped the robbers from raiding the bank. Four men were arrested while a suspect was killed.

“Investigation has commenced to determine how they entered the bank and other things.”