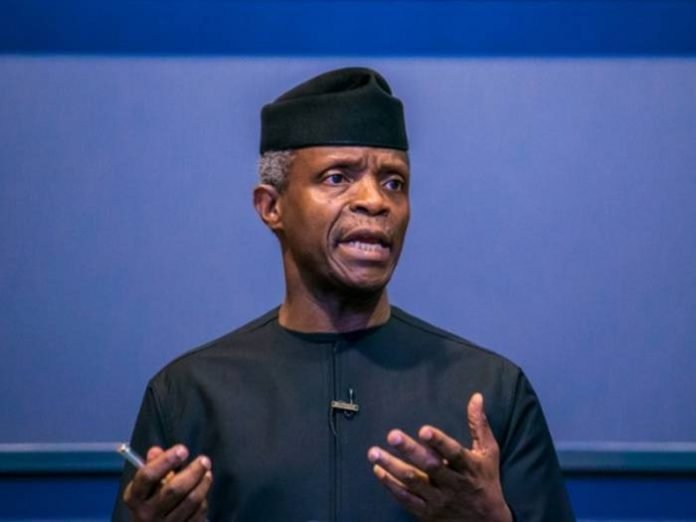 Vice President Yemi Osinbajo said on Monday the country is far behind in the race to eradicate poverty.

He stated this at the second Abiola Ajimobi roundtable programme to mark the 70th birthday of the former governor of Oyo State.

The programme was attended by many governors, former governors, prominent traditional rulers and several other businessmen and women across the country.

While speaking on the topic: “Managing the Dynamics of Nigeria’s Advancement: The Socio-Economic options,” Osinbajo said “there are two issues and I’m glad that by the response of discussants, the two issues stood out. One is the environment for local and foreign investments and second is eradicating poverty.”

“It’s very obvious that we are behind the race in eradicating poverty. The reason being that before now, there were no systematic and focused approach to eradicating poverty in our country. This is why from 2014-2015, the APC decided to write social investment into our manifestos.

“So, the social investment we are talking about is not by accident. It’s a comprehensive programme to tackle poverty. It’s a detailed programme and the first of its kind anywhere in Africa. The programme is very seriously scrutinized by the World Bank and as a matter of fact, the World Bank is a collaborator.”

“Till date, that school feeding programme accounts for feeding of over 9.9 million pupils in 33 states and we are going to 36 states. 540,000 people are being paid monthly. Of course, it’s not a perfect programme but it’s the first pragmatic approach to tackling poverty”.

“That’s what countries with a large population of the poor did and today it has taken a large number out of poverty. It’s very important to bear in mind that we are at the first stage of the programme and we will do a lot more.”

The former governor of Osun State, Rauf Aregbesola, said for the economy to improve, the rich in the country “must be taxed mercilessly.”

According to him, to help lift the poor from the mud of poverty, the rich would have to pay more than they are paying as taxes.

“My firm belief is that there must be transparency, rigorous poverty alleviation and anti-corruption programme. We must mercilessly tax the rich and the keyword is mercilessly. I mean those who are in possession of money either legitimately or through other means. It is when we have access to money that we can affect the lives of the majority of the people who are poor due to inequality in the distribution of the wealth of the nation.”