KANO 9 REVELATIONS: A GOOD TIME TO DO AN IN-HOUSE CLEANSING 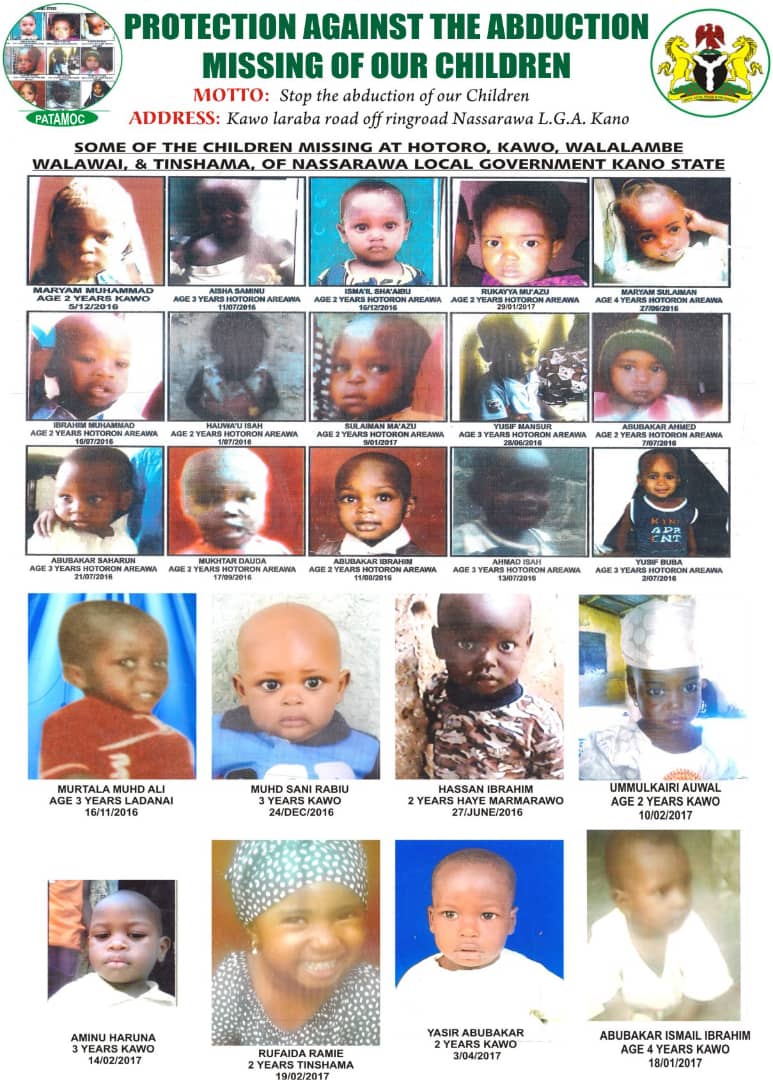 I am sure by now almost the whole world is aware of the greatest injustice and injury done to some 9 Kano State Muslims kids, who are all between the ages of 2 – 9 years.
In case you missed the news of this dastardly act, these Muslims kids were stolen from Kano, transported to Onitsha in Anambara State, sold and converted to Christianity. This is the highest form of injustice I heard in recent years, innocent children who could not even understand what life is, they were all stolen at the ages that they can easily be converted to just anything without any resistance. So sad.

Since when the time this sad news filtered in, through the Nigerian Police there were so many different responses through different media houses and social media. We all wrote and said what we have to say, and we are still saying, until justice is done and seen to be done squarely and decisively.

In line with the many revelations that were unearthed since the exposure of those wicked and merciless abductors, I want say to all of us that, this is the best time for us to do a thorough in-house cleansing within us and around us. In case I will be misunderstood, let me clear your thoughts.

It was revealed that because of rescuing the #Kano9, it was discovered that hundreds of children are/were reported to be missing from various locations in Kano. This could not have been known had it been #Kano9 were not rescued, so, you see I supposed we have more difficult work to do ahead than just make noise in the social media and other channels, so as to save as many missing Muslims children as possible and to also forestall future occurrence of this heinous crime to humanity.

You see, the most worrying part of the #Kano9 revelations is the players involved in the dastardly act, according to the report, the two people(a man and woman) that were caught and are being suspected to be the ones abducting, transporting and selling these children, are people that are have been living, are still living and interacting in the day-to-day activities in and within us in our environment. They have been in our society to such extent that we all became so much comfortable with them and accepted them to be part of us, not knowing that all along they are pretenders and were pretending to be our good neighbors, but in actual fact they are serpents in sheep’s clothing. This is very worrying and seriously disturbing.

It is worrying because we will now be wondering HOW DO WE TRUST THEM AND THEIR LIKES ANYMORE? AND FOR HOW LONG HAS THESE STEALING AND CONVERSION BEEN GOING ON? WHAT IS THE REAL MOTIVE OF THIS HEINOUS CRIME? And it is equally disturbing because we will now be asking, out of the many hundreds of our missing kids, HOW MANY ARE DEAD? HOW MANY ARE CONVERTED CHRISTIAN SLAVES? AND HOW MANY ARE CONVERTED CHRISTIAN ADOPTED IGBO SONS AND DAUGHTERS BY NOW?

You can now imagine the trauma that the parents of the hundreds of these stolen and most likely converted children are passing through? Especially now that they are aware that most of their children are now alive but under an entirely different identities(different names, different religion and under entirely different culture). It is just too horrible to imagine their inner feelings and terrible heartaches. So pathetic.

I believe it is now the right time to start noticing the neighbors around us, most importantly, our Christian Igbo, I am sorry to those good Igbos within our midst, but this dastardly act and the whole scenario around it calls for a very serious review of our inter-tribal relationships. It may sound somehow, but looking at it deeply you will understand my point of view.

Just imagine somebody you gave a space around you to live, wholeheartedly, trusting that fellow completely, despite your different religious beliefs, yet you accepted him without any feeling of religious insincerity, living with him/her for years, accommodating him/her both physically and in your heart, only to find out that he is indeed the most dangerous enemy within. How can one swallow this? How do you continue to put your trust to the people of his tribe again? It will really be very difficult to comprehend and to come to terms with.

Let me tell you some of the magnanimous privileges to our Igbo brothers and sisters that live in Kano, go round the Sabon gari, Dakata, Brigade, Airport road, Fanisau side, etc, you will then understand what I am talking about. You will see magnanimity in it’s raw form. You will see different tribes, but most importantly, the highest percentage are people from Igbo tribe, living comfortably and in many cases now owning the structures that they are living or doing their businesses in, without any intimidation, harassment or any form of segregation. I assure you, but I stand to be corrected, that you will never find a Hausa Muslim comfortably owning any structure in the East. I doubt this much, but like I said, I stand to be corrected!

But yet, these are the same people that are now turning around to breach this exceptional trust bestowed to them, by STEALING OUR INNOCENT CHILDREN OUT OF OUR REACH, TO THEIR FARAWAY LAND, AND THAT IS ENOUGH, THEY WILL THEN CONVERT THEM FROM THE MUSLIMS THEY WERE BORN IN TO CHRISTIANITY. NO, THIS IS UNACCEPTABLE AND HARDLY FORGIVABLE!

We must say it loudly and clearly as well that this dastardly act must be rooted, uprooted and the culprits must be severely punished. And WE MUST UNDERTAKE AN IN-HOUSE CLEANSING SO AS TO REMOVE THE WEEDS WITHIN AND AROUND US AND ALSO REDEFINE OUR CONTRACT OF ENGAGEMENTS USING OUR OWN TERMS.