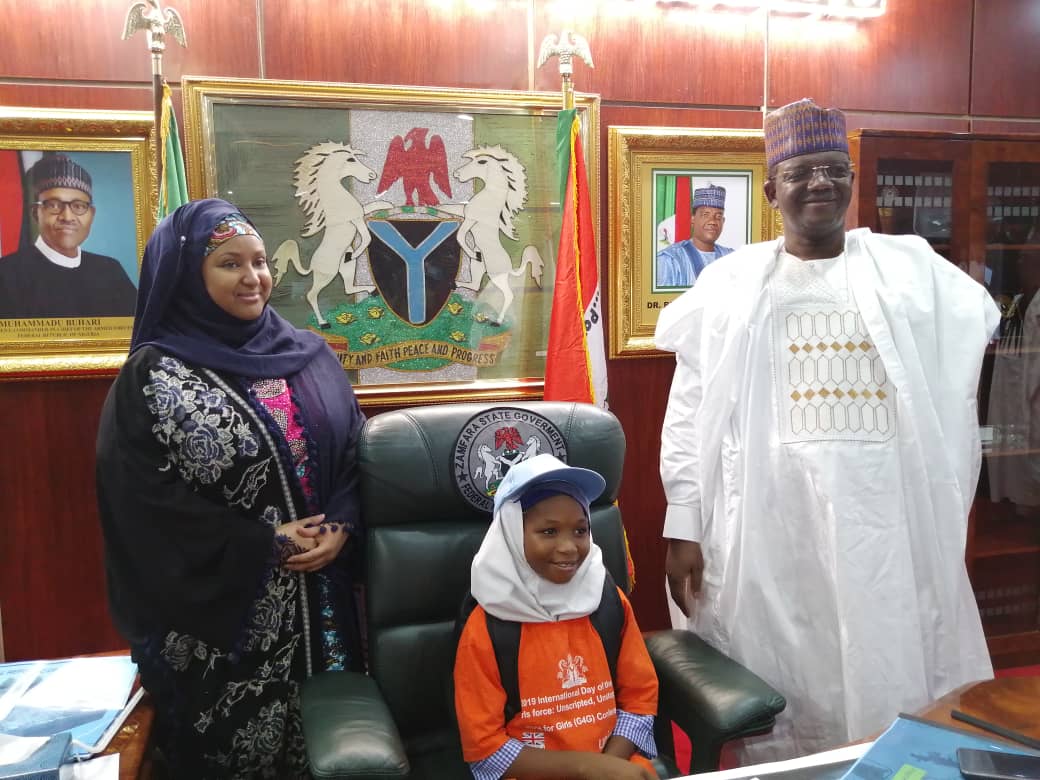 A 13 year old primary six pupil, Asma’u Habibu Tsafe has served as Zamfara state governor for 15 minutes instructing security operatives to be up and doing in tackling banditry.

Governor Asma’u immediately ordered that her short lived administration will not tolerate laxity among the security for which she noted the state government is doing its best to support them.

Asma’u made it to the 15 minutes governorship position having been part of the Ali Akilu Model Primary School,Tsafe UNICEF organized visitors to the Government House, in celebration of the 2019 International Day of the Girls under Girls for Girls (G4G).

She joined her school mates on the visit which was at the instance of the state’s First Lady, Hajiya Aisha Bello Matawalle.

She impressed the host governor Matawalle when she spoke perfectly in both Arabic and English languages as well as explained that she will want to become a medical doctor and protect peoples lives when she grows up.

After she handed back power to Governor Matawalle, he urged the upcoming ladies to be of good manners while pursuing their education adding that it is only when they have sound education that they can protect themselves from political, economic and other forms of molestations.

He reassured them of his earlier pledge to improve the wellbeing of women in the state as well as improve the quality of education of the youth especially the girl-child.

Earlier, the first lady, Hajiya Aisha Bello Matawalle who thanked her husband for receiving them said she conceived the idea of bringing them to the Governor’s office in appreciation of Matawalle effort at improving the girl-child education and protection in the state.

The meeting was attended by the state Head of Service, Alhaji Kabiru Balarabe, the Secretary to the State Government, Alhaji Bala Bello Maru, and the Permanent Secretary, Government House, Alhaji Ibrahim Kaura among others.