No hiding place for criminals in Kano – Gov. Ganduje 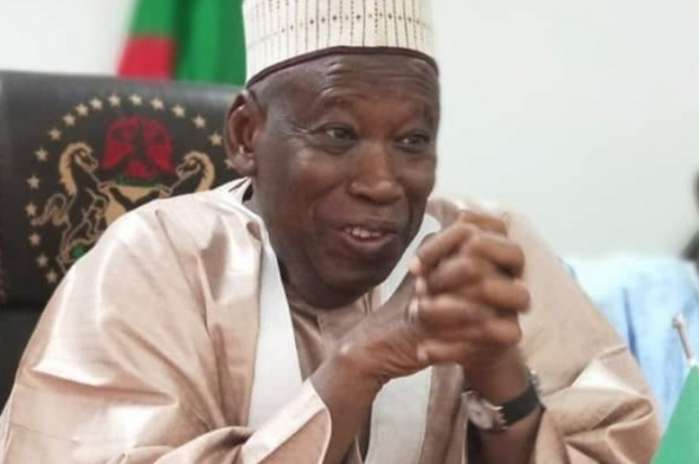 No hiding place for criminals in Kano State, they are on the run sequel to obvious fact of being caught and arrested by security in my state says Governor Abdullahi Ganduje.

Ganduje maintained that 95 percent of victims of kidnap whose money were forcefully collected have been recovered and their kidnappers were also arrested in Kano state.

The governor disclosed this over the weekend while responding to questions from Journalists in Yola, Adamawa state.

Ganduje further explained that the security successes realized in kano was as a result of a formidable security network instituted by his administration in collaboration with all security agencies, hunters association, traditional rulers, religious leaders, youth leaders and the people of Kano.

He also added that cameras, ICT and some powerful security equipment which he cannot mention publicly are used to track criminals and get them arrested when they run into kano to hide.

According to him, “that is why most of the kingpins of kidnappers and other perpetrators of other criminal activities in others states when they ran into kano assuming that it is a big city and a good hideout without been noticed, they end up been caught and arrested by security agencies”

He said the only way out of the security challenges bedevilling the country is governments strong will to introduce community policing, empower security agencies with logistics and security equipment in collaboration with the citizens of the state to divulge intelligent reports and information that will assist to track criminals.

The governor while also responding to health issues in his state says more than N200 million is saved in the account of the state Health Trust Fund monthly, set up to enhance healthcare services.

He said that the fund was initiated to strengthen health care through the prompt provision of drugs and facilities to hospitals.

“We have done much in health provision to the extent that the state government had introduced a health development trust fund where five and one per cent of state and local government areas monthly Internally Generated Revenue are been kept.

“Every month, we get almost N200 million into the Health Development Trust Fund which is meant for the provision of necessary and immediate health facilities, drugs among others across the state.”

He said his administration had also introduced a contributory health scheme for civil servants and their families, to enable them access health services at a very affordable rate.

On education, the governor said his administration has made basic and secondary education free and compulsory for every child in the state.

”We decided that the girl-child and Al-majiri system of education be given priority and integrated into the formal school system,” Ganduje added.

He said the state government had embarked on the renovation of primary and secondary schools, training of teachers and provision of instructional materials

However, he said he was in Yola to attend a wedding ceremony of his in-laws.