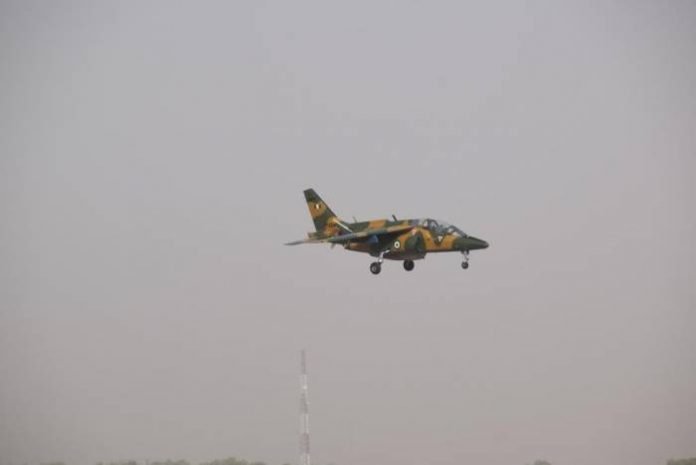 The Federal Government has released funds for the purchase of 12 Super Tucano aircraft from the United States of America in its bid to fight terrorism in the North-East.

Chief of Air Staff, Air Marshal S. B. Abubakar, who stated this at a meeting with journalists in Abuja on Sunday, also said that the military was winning the war against terror.

He disclosed that the Nigerian Air Force was also seeking private sector partners to complement the futuristic plans for further investments in advanced weapons technologies, especially the manufacturing and deployment of Unmanned Aerial Vehicles otherwise known as drones.

He said, “In the last 3 years, the NAF fleets of aircraft have recorded unprecedented growth. A total of 16 brand new aircraft were purchased, while 13 previously grounded aircraft were reactivated with reactivation of another two presently in progress.

“Platforms inducted into the NAF during the 2018 calendar year include additional Super Mushshak aircraft acquired from Pakistan, additional new Mi-35M Helicopters gunships delivered to Nigeria from the Russian Federation, Bell 412 helicopters, Tsaigunmi UAV and one Alpha Jet ferried in from the USA.

“In addition to these, the Federal Government has also released funds for the purchase of 12 Super Tucano aircraft from the Government of the United States of America, while another 5 attack/utility helicopters have been ordered from Italy. “

He added that in spite of speculations and the influx of foreign terrorists from Syria and Iraq, the Nigerian military is winning the long-drawn war against insurgents in the North East.

The Air Marshal emphasised the determination of the military to sustain healthy and harmonious working relationships with the Nigerian mass media, about nineteen NAF experts who studied for Ph.D degrees in the United States of America are participating in NAF’s UAV project.

He also said that in addition to young talented Nigerians studying avionics and other advanced military technological courses at the Air Force Institute of Technology in Kaduna, NAF has a bank of expertise that includes 52 officers with Masters degrees in Space Technology and related high tech programmes.

He also spoke of the extremely useful contributions of NAF’s ISR platform for intelligence-gathering and reconnaissance that have helped facilitate the successes of NAF/Army synergy in various military operations in the North East.

Abubakar stated that the Nigerian Air Force has been thoroughly repositioned for greater efficiency and success, adding that an increasing number of multi-million dollar air asset maintenance projects are now being undertaken in Nigeria, using indigenous expertise in NAF.

He said, “Upon assumption of office in 2015, I came on board with the vision of repositioning the NAF into a highly professional and disciplined force through capacity building initiatives for effective, efficient and timely employment of air power in response to Nigeria’s national security imperatives.

“In the process of repositioning the Service, the current NAF administration has, within the last three and half years, recorded remarkable achievements in the fight against terrorism and other forms of criminality in the country.

“This has been greatly facilitated by the acquisition of new platforms and reactivation of existing ones.

“The NAF has also witnessed enhanced professionalism through the expansion of its organizational structure and augmentation of its manpower strength; tremendous progress has also been made in the areas of human capacity development, enhancement of personnel welfare as well as Research and Development (R&D).”

On the relationship between the force and civilians in the North-East, he said that in an effort to alleviate the sufferings of IDPs and strengthen better civil-military relations between the NAF and members of host communities, the Service established two level 2 hospitals in Bama and Dalori in Borno State.

The NAF, he added, also continued to conduct medical outreaches all over the country and have since treated 479,921 as at December 2018.

“The NAF also initiated a school feeding programme for 1,000 school children which has greatly contributed to the number of pupils that have returned to school in the area,” he added.