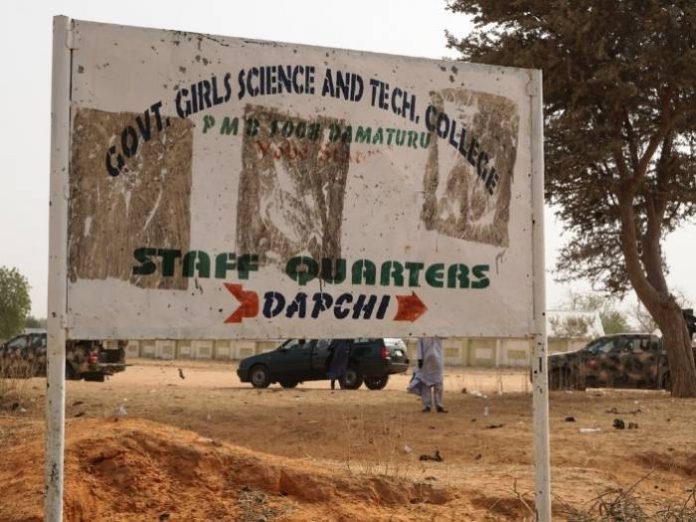 Parents of the girls kidnapped on Monday from Government Girls Science Technical College, Dapchi, in Yobe State, at the weekend submitted to the school authorities the identities of 105 schoolgirls that remained unaccounted-for after Monday’s raid on the school by gunmen suspected to be members of Boko Haram. The parents gave the names and local government areas of those kidnapped, as well as their parent’s telephone numbers. They said the number of abductees was expected to rise because some people had yet to come forward with reports of their missing wards.

The parents accused the state government of not treating the case of the abducted girls seriously and appointed a leader to coordinate their response to the ordeal.

There had been discordant claims regarding the aftermath of the armed attack on the school by suspected Boko Harm operatives. While the military claimed it rescued some kidnap victims, Yobe State government denied any rescue, but the parents of the schoolgirls insisted insurgents took away students.

Leader of the affected parents, Mallam Bashir Manzo, said from the circumstances of the incident, the terrorists had come just to kidnap.

Manzo stated, “The insurgents came into the town with a plan to abduct the girls. They did not know the exact location of the school; so they abducted some boys in town to take them there. The boys mistakenly took them to the Central Primary School, and when they found out that it was the wrong place they were angry and threatened to kill the boys. They subsequently abducted some other boys who took them to the school.

“When they got to the staff quarters gate, as they could not locate the girls, they started shooting and since the girls were alerted at their hostels, some scaled the fence and some others tried escaping through the main gate and they saw some men in khaki whom they mistook for soldiers, they invited the girls into their parked vehicle and took off in the name of rescuing them from Boko Haram.”

“We would want those parents that have not yet seen their children to come and register on the list.”

One of the parents, who did not want his named mentioned for fear of being targeted, explained why Governor Ibrahim Gaidam was attacked on Thursday by some aggrieved residents of Dapchi, headquarters of Busari Local Government Area.

He said, “When the governor came, we were gathered at the house of the District Head and the governor told us that none of the girls had been rescued. The governor said he was not sure whether our children are in Boko Haram’s captivity, but we are sure that Boko Haram took our children. We have evidence.

“When they took them (children), they were crying and screaming for help. They came through the Gumsa Road and went back on the same road.

“Residents of villages along that road heard the children crying and screaming in the vehicles.

“In one of the villages, residents overheard the insurgents saying they needed to tie the children well so that they won’t escape.

“They (insurgents) only came to get the girls and not to do anything in this town. We took the photographs of the store of the school and everything is intact. No single food item was removed.”

The parents said they were angered by the governor’s announcement that some of the kidnapped girls had been rescued, only to come to tell the people the next day that no been had been rescued.

Gaidam had on Wednesday announced that the military had freed some of the seized schoolgirls. But when he visited Dapchi on Thursday, he broke to the people a grim reality that none of the girls had been rescued, to the annoyance of residents.

“This is irresponsibility of the highest order of someone in his position,” a parent stated, adding, “We are not happy with the delegation of the Federal Government. They did not look for the principal or the parents of the missing girls or enter any office of the principal or a classroom in the school when they visited Dapchi.”