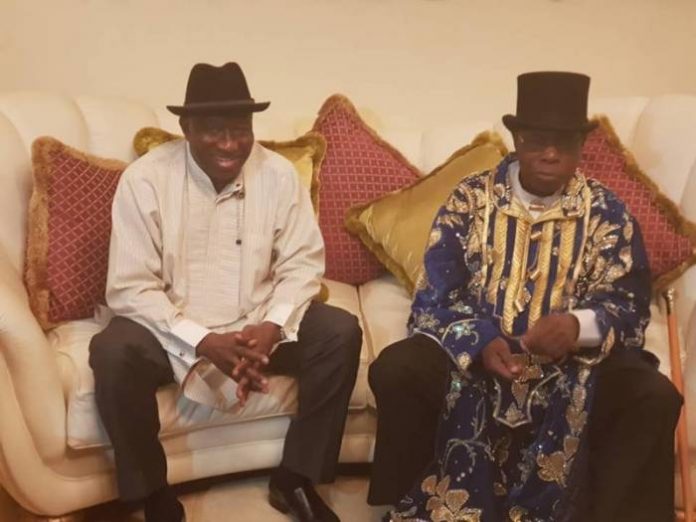 Jonathan and his wife, Patience, welcomed the elder statesman who was in their home for a private dinner.

Earlier before the visit, Obasanjo inaugurated a government specialist hospital in the state and unveiled the Bayelsa Heliport which was renamed after the first military administrator of the defunct Rivers State, Alfred Diete-Spiff.

Upon his arrival in Bayelsa, the former president was received by the state governor, Seriake Dickson, in company with some top government officials in the state.

Obasanjo, on Friday, commended Gov. Seriake Dickson of Bayelsa for embarking on projects that would improve the overall development of the state and the people.

He said the centre was built according to international standard and would assist in improving health care delivery to the people.

He added that “20 years ago when I came to Bayelsa for campaign, there was no space to gather people, but today, there is great difference

“Yes, for full development to take place in Bayelsa, there must be accessibility in terms of transportation, communication and health care delivery.

“I must tell you, for six hours I am here, I have seen something to convince me that Bayelsa is already in transformation stage.

“The health facility here is second to none.”

Earlier, Gov. Dickson said the diagnostic centre was part of his promises to the people of Bayelsa.

Dickson reiterated his administration’s readiness to continue to work to uplift the healthcare delivery in the state.

He said the uncompleted 500-bed hospital initiated by previous administration would be given a face lift in the next fiscal year.

“We will complete the project before the end of my tenure,’’ he assured.

The Commissioner for Health, Prof. Ebitimitulah Etebu, said the centre was capable of taking care of the diagnostic needs of people in the state.

He added that “the diagnostic centre would handle screening of blood, radiology and the result transmitted electronically to international partners in America.”