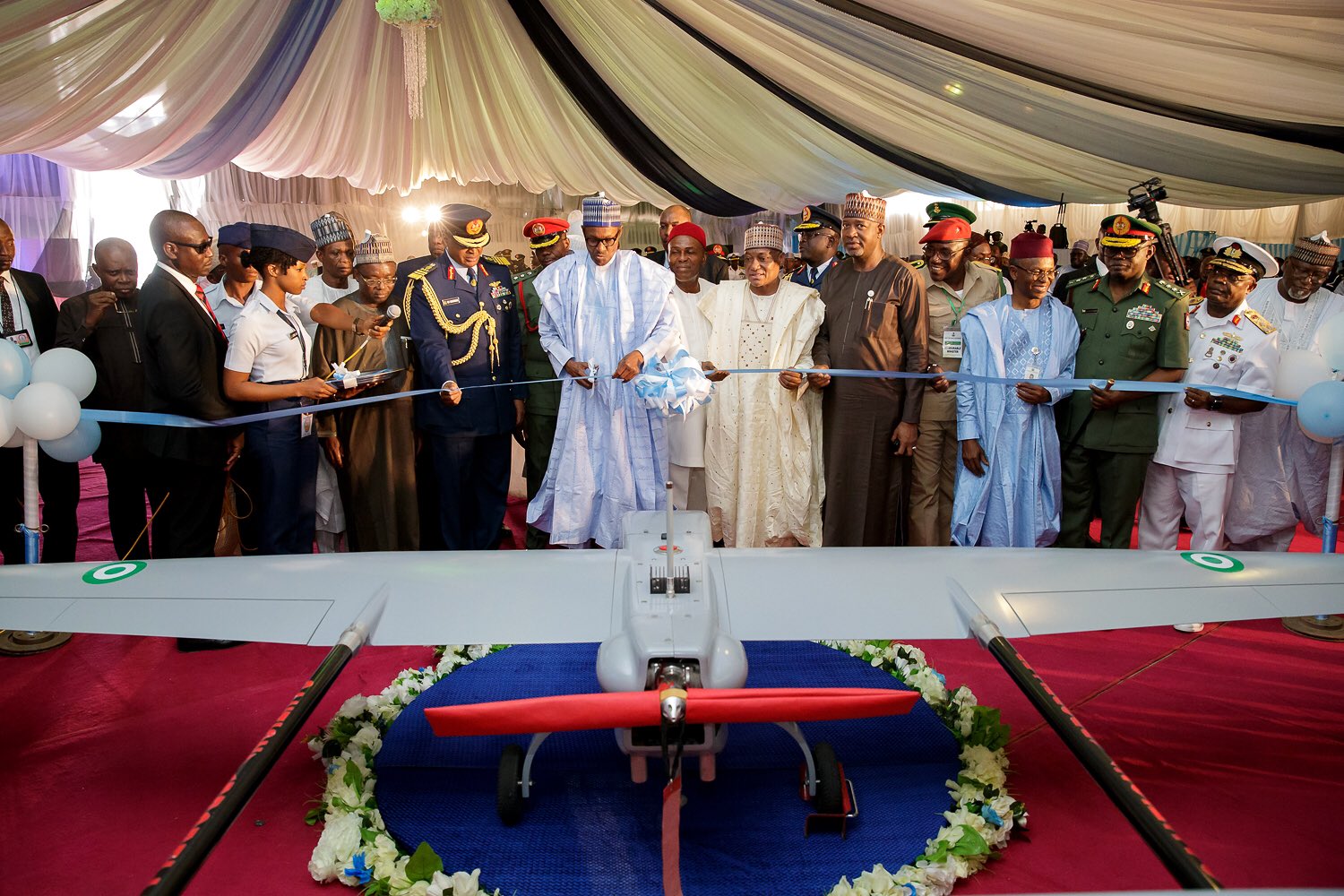 President Muhammadu Buhari on Thursday in Kaduna inaugurated a new drone developed by the Nigeria Air Force for intelligence gathering, surveillance and reconnaissance.

The Unmarked Areal Vehicle, named Tsaigumi, is to boost the capacity of the military.

Buhari said: “From the military perspective, the added capacity for intelligence, surveillance and reconnaissance provided by the TSAIGUMI will boost ongoing and future security operations.

“As this project moves into the next stage, which is mass production, it would create employment and possibly generate revenue as Nigeria’s first military export product.’’

According to him, the technological feat is an indication that there is potential to apply the same innovative mindset to addressing other areas of indigenous technological needs.

He said: “While I commend the Nigerian Air Force for this accomplishment, I enjoin you not to rest on this achievement but to strive harder in your research and development efforts for greater innovation.

“Be assured of this administration’s support towards the attainment of greater technological milestones for our nation.’’

Buhari reiterated the commitment and firm resolve of his administration to take Nigeria to the next level of growth and development.

He said: “We remain determined to overcome all challenges to our security and development as a nation. I enjoin all well-meaning Nigerians to join hands with us to make our collective dreams of greatness a reality.

“Government remains determined, despite numerous challenges to bring about the much-needed CHANGE that will lift our beloved nation to its rightful place as a major economic and political force on the world stage.

“Accordingly, as I outlined in my New Year Day broadcast to the nation, this Administration has designed series of key projects to dramatically overhaul national infrastructure and overcome the deficit in that vital area.

“The role of the military as an enabler of national development cannot be overemphasized, as efforts would be futile if national security is not first guaranteed.

“In this regard, let me once more commend the gallant men and women of the Nigerian Armed Forces and other security agencies, for their tireless efforts towards defeating Boko Haram and all other threats to our nation’s security, thus ensuring that the government can proceed with its developmental activity without hindrance.

“Let me again commend the Nigerian Air Force leadership for the unprecedented feat it has attained on Research and Development.

“I am aware that the Air Force was the overall best in the recently concluded 2017 National Technology and Innovation Exposition under Research Institute category.

“Accordingly, its drive, determination and unwavering support brought about numerous significant innovations, not least of which is the TSAIGUMI which I am inducting today.

“It is indeed most gratifying that the Nigerian Air Force has gone a step further than simply acquiring them, to developing Unmanned Aerial Vehicle capabilities with indigenous technology.

“This outstanding accomplishment, which we are gathered today, holds promise of both military and economic benefit to the nation.’’

Earlier, the Chief of Air Staff, Air Marshal Sadiq Abubakar, said the unmanned vehicle has a “mission range of 100 km, a service ceiling at 15,000 feet and operational endurance of about 10 hours’’.

Abubakar said: “This is necessary because it is through R&D that nations technologically advance and enhance their productivity, spur economic growth and address societal concerns such as health, energy, environment, defence and security.

“Besides, to be effective and efficient in dealing with contemporary security challenges posed by non-state actors, there is the need to build capacity to develop smarter and highly sophisticated indigenous platforms as well as compact and mobile forces that use information technology to get real time intelligence necessary for military operations.”

Sadiq added that the NAF Research and Development Centre established in 2015, “has so far successfully repaired the CH-3A Unmanned Combat Aerial Vehicle that had been grounded for over four months due to the lack of spares.

He said: “Since its reactivation on 2nd January 2018, the UCAV has conducted several missions which have positively impacted on our Operations in the North East.

“As I speak, the UCAV is engaged in combat missions in the North East.

“Only last week it acquired and destroyed Boko Haram Terrorists and their equipment in the Sambisa general area.

“We have also tasked the centre to address gaps in specific areas of operational needs of the Service.

“One such area of need has been that of enhancing NAF’s Intelligence Surveillance and Reconnaissance capabilities to meet national security imperatives.

“In this regard, AFRDC has been charged to build capacity to maintain all ISR platforms that are currently in the Service.

“Similarly, the AFRDC was tasked to operationalise the Gulma UAV prototype taking into cognisance the peculiar challenges associated with our operating environment.

“It is gratifying to state that the efforts in this direction have, yielded positive results which include among others, the production of the TSEGUMI UAV.”